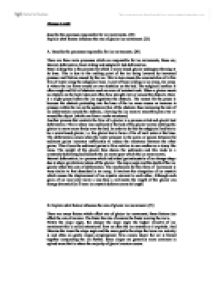 describe the processes responsible for ice movements. (20) Explain what factors influence the rate of glacier ice movement. (25) A. Describe the processes responsible for ice movements. (20) There are three main processes which are responsible for ice movements, these are; Internal deformation, basal sliding and subglacial bed deformation. Basal sliding this is the process by which a warm based glacier undergoes thawing at its base. This is due to the melting point of the ice being lowered by increased pressure and friction caused by the ice. This in turn causes the accumulation of a thin film of water along the subglacial base. A part of basal sliding is ice creep, Ice creep is where the ice flows around or over obstacles on the bed. The subglacial surface is often rough and full of obstacles such as areas of resistant rock. When a glacier meets an obstacle on the bed it does not often flow straight over or around the obstacle, there is a slight pause before the ice negotiates the obstacle. The reason for the pause is because the obstacle protruding into the base of the ice mass causes an increase in pressure within the ice on the upstream face of the obstacle. ...read more.

The slope angle and the depth of the ice greatly effect this rate of deformation. The mechanism for this form of movement is very similar to that described is ice creep. It involves the elongation of ice crystals which causes the displacement of ice crystals relevant to each other. Although each grain of ice may only move a less than a millimetre the length of the glacier can change dramatically if more ice crystals deform across its length. B. Explain what factors influence the rate of glacier ice movement. (25) There are many factors which effect rate of glacier ice movement, these factors also effect the rate of erosion. The faster the rate of erosion the faster moving the ice is. Firstly the slope angle, the steeper the slope angle the higher velocity of ice movement this is called extensional flow as often the ice extends as it expands. And likewise the lower the slope angle and the more gentle the slope the lower ice velocity is and often on gentle slopes compressional flow occurs where the ice is forced together compacting the ice further. ...read more.

Climatic fluctuations, these fluctuations cause periods of rapid glacial advance and retreats called surges. The more often the diurnal temperature variations around 0'C occur the faster many erosional processes like freeze thaw occur. And likewise the colder the weather and the more precipitation the faster the rate of accumulation and so the faster the rate of glacial advance/growth. Geology, an important factor which governs the rate at which a glacier moves is that of the underlying bedrock of the area. This can make a large difference to the rate of ice movement as a more resistant bedrock would provide a harder surface for glaciation to erode. Whether this is at a nivation stage where the corrie/cirques is about to be formed or when previous landscapes such as interlocking spurs block the path of glacial advance this rock may be such as granite. Again in opposite a softer less resistant rock such as sandstone may be easily eroded and so the glacier may move more quickly as the landscape provides less physical resistance. Depth of glacier, the deeper the glacier the faster the rate of glacial advance. This is because more force upon ice crystals promotes internal deformation. ?? ?? ?? ?? Thomas Levick ...read more.