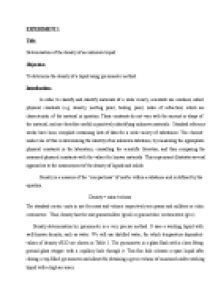 Determination of the density of an unknown liquid

﻿EXPERIMENT 1 Title: Determination of the density of an unknown liquid Objective: To determine the density of a liquid using pycnometer method. Introduction: In order to classify and identify materials of a wide variety, scientists use numbers called physical constants (e.g. density, melting point, boiling point, index of refraction) which are characteristic of the material in question. These constants do not vary with the amount or shape of the material, and are therefore useful in positively identifying unknown materials. Standard reference works have been complied containing lists of data for a wide variety of substances. The chemist makes use of this in determining the identity of an unknown substance, by measuring the appropriate physical constants in the laboratory, consulting the scientific literature, and then comparing the measured physical constants with the values for known materials. This experiment illustrates several approaches to the measurement of the density of liquids and solids. Density is a measure of the ?compactness? of matter within a substance and is defined by the equation: Density = mass /volume The standard metric units in use for mass and volume respectively are grams and milliters or cubic centimeters. Thus, density has the unit grams/milliter (g/ml) or grams/cubic centimenters (g/cc). Density determination by pycnometer is a very precise method. It uses a working liquid with well-known density, such as water. We will use distilled water, for which temperature dependent values of density rH2O are shown in Table 1. ...read more.

Hence, V = 51.06 cm3. 2) Density of unknown liquid, dL Density of unknown liquid, dL = = = 0.7898 g cm-3 By using the reference table of the following:- Liquid Density (g cm-3) Ethanol 0.789 Methanol 0.791 Chloroform 1.490 Benzene 0.877 Table 2.4: Reference table for identification of unknown liquid According to the calculation, the density of unknown liquid, dL = 0.7898 g cm-3 The density of the unknown is the nearest to the density of ethanol. Therefore, it can be concluded that the unknown liquid is ethanol. Discussion: The volume of an object increases with increasing temperature, because of the matter’s volumetric thermal expansion. The density of an object depends on its temperature, with higher temperature resulting in lower density. Exception is water in temperature range 0-4 °C, for which the density increases with increasing temperature. The density of a gas further depends on the pressure as well. Nevertheless, this effect is negligible in a case of liquid and/or solid matter. A material’s density is defined as its mass per unit volume. It is, essentially, a measurement of how tightly matter is crammed together.. One of the most common uses of density is in how different materials interact when mixed together. The change in density can also be useful in analyzing some situations, such as whenever a chemical conversion is taking place and energy is being released. Density determination by pycnometer is a very precise method. It uses a working liquid with well-known density, such as water. ...read more.