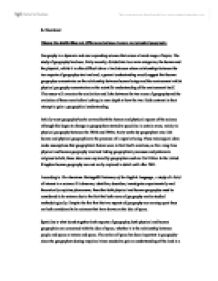 Discuss the similarities and differences between human and physical geography

S. Merchant Discuss the similarities and differences between human and physical geography Geography is a dynamic and ever expanding science that covers a broad range of topics. The study of geography has been, fairly recently, divided into two main categories, the human and the physical, whilst it is often difficult draw a line between where relationships between the two aspects of geography start and end, a general understanding would suggest that human geography concentrates on the relationship between human beings and the environment whilst physical geography concentrates on the scientific understanding of the environment itself. This essay will examine the similarities and links between the two areas of geography and the evolution of these areas before looking in more depth at how the two fields contrast in their attempt to gain a geographical understanding. Initially most geography books covered both the human and physical aspects of the science although this began to change as geographers started to specialise in certain areas, mainly in physical geography between the 1920s and 1940s. Early works by geographers also link human and physical geographies to the presence of a superior being. These teleological ideas made assumptions that geographical factors were in fact God's creations, so for a long time physical and human geography involved linking geographical processes and patterns to religious beliefs, these ideas were explored by geographers such as Carl Ritter. ...read more.

Regardless of the fact that human geography is seen to be a humanity or a social science as apposed to a natural science (such as physical geography) both elements are related to one another and overlap with each other. This is due to the fact that human influences affect the environment and environmental issues affect humans whether it is their behaviour, distribution, culture or wealth etc. In other words, the nature of an area will determine the type of practices that are carried out there, for example mining can only take place where natural resources are abundant and urbanisation generally requires large areas of relatively flat, accessible land. Due to the interaction between the two areas of geography it is often difficult to decide if some processes are solely physical or human; human processes such as urbanisation and globalisation can lead to physical problems such as pollution and global warming yet the impact of such problems will be on both the environment and human beings. Since the cultural turn human geographers have tried to move away from the study of regional geography in order to gain a more intellectual understanding of the world rather than producing descriptive catalogues of relatively small areas. Therefore human geographers are interested in the relationship between people and space. It is then the study of real lives rather than the description of an area that human geographers are interested in. ...read more.

For example, there is no debate over how a volcano erupts or why rivers erode their banks. This is not to say that there is no element of controversy within physical geography for instance some scientists do not agree with the idea that global warming is taking place. In conclusion human geography focuses on all that is human and physical geography concentrates on the physical processes of the environment. Both elements are interrelated and the focus of their study has changed over time, both areas of geography have made an effort to move away from out dated simplistic theories and both areas have an interest in current affairs. It can be said that although both areas come under the heading of "geography" recently the two disciplines have moved away from each other and have established their knowledge in separate fields of expertise, this can be seen by the fact that human geography articles are published in journals of social science and physical geography articles are published in natural science journals. Space is the key to both sides of geography as both areas are concerned with how communities or environments and their distribution change dependant on their location. Despite the fact that there are many linkages between the two sides of geography, the fact that they are diverging suggests that there are rarely similarities within the two disciplines. That is not to say that this was always the case as geography began as one subject which was concerned with the mapping and cataloguing of regions in order to describe parts of the earth. ...read more.