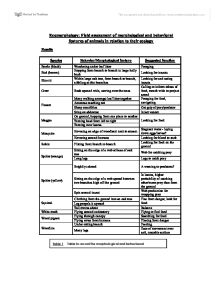 From the results, it can be seen that the animals found in the local environment here at the University of Kent do have various physiological and behavioral adaptations that help them to find food, travel, and avoid danger.

Morphologically, the species are physiologically adapted to interact with certain behavior. For example, the spiders are quite crafty in their way of standing by their webs and not directly on them, so that their prey does not notice of its bright color, which in turn is adapted for warding off predators, as enemies associate loud colors such as yellow and orange to the colors of poisonous berries (Cambridge University Press 2006, 266). They are able to eat what they want, but avoid being eaten themselves. Also, the squirrels hind legs are very muscular for its size, thus provides a high amount of propulsive force when it finds itself in danger.

Another example is the crow that opens its beak wide open to project its calls, possibly to informing its kind where food can be found. This is an example of efficient behavior for foraging. Communication between individuals, such as in the fire ant, is also helpful in navigation and food foraging as a greater number of individuals looking out for food means spreading over a larger area of land, a higher probability of finding food, and yielding a greater amount of food altogether for the colony.

The animals altogether as an ecological system behave rather efficiently to achieve an overall, utilitarian good of the many. Each animal has its own place to feed, from the wood pigeon that flutters around the canopy, to the mosquito that hovers around larger, blood-circulating organisms, from the yellow spider that sets up webs between two high branches, to the woodlice and beetles that feed off dead matter under leaf litter, there is little competition as all the carnivores, frugivores, nucivores, folivores, detritivores, insectivores and herbivores have their own place in the ecosystem.