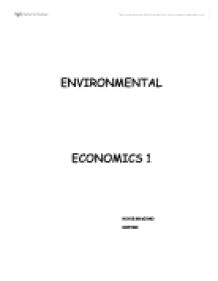 ENVIRONMENTAL ECONOMICS 1 REYES BRAGIMO K0427364 TOPIC 19: "The Kyoto Agreement should be enforced without delay" ? The Government agreed in 1997 the Agreement Kyoto of The United Nations Framework Convention on climate Change (UNFCCC) ? The agreement will come into effect only when 55 nations which add up to 55 % of the greenhouse emissions confirm it. Now there are more than 150 nations, but the emissions of the EE.UU and Russia mean 33% and 17%, respectively and they don't want to sign the agreement. ? The main objective is to get reduce 5.2% the volume of the greenhouse gases emissions below their 1990 levels for the period 2008-2012 ? Kyoto's mechanisms O Emissions trade => buying and selling of greenhouse gases emissions between industrialize countries or countries belonging to the Annex I of the Agreement Kyoto. ...read more.

Reasons to worry us. O The concentration of the greenhouse gases has continued increasing => this can be due to human activities: cars, factories, rubbish and etcetera. O The climate changed during the last century: average superficial global temperature has increased between 0.3 and 0.6 Celsius degrees since the last years of the 19th century. The world level of the sea has grown up between 10 and 25 centimetres in the last hundred years. O There are studies which show the human influence on the world climate. O The climate will continue changing in the future => the change will involve: loss of animal species and plants, the level of the sea can grow up between 15 and 95 centimetres for the year 2100, more probability of torrential rains, droughts, flooding and etcetera. ...read more.

Besides there are a lot of cases of malaria (Africa), yellow fever (Ethiopia) and dengue fever (Costa Rica, Colombia and Mexico). ? I have only found reasons because of these the Agreement Kyoto must be come into effect as soon as possible. From my point of view I think that if we don't carry out the agreement the life in the Earth can be intolerable in the next decades. We are contaminating too much the environment and this can cause the death of a lot of people due to heart attacks, respiratory diseases or other diseases. If we want to live in the best world possible, all of us must to contribute to get it. WEBSITES O www.appa.es O www.eco-sitio.com O archive.greenpeace.org ...read more.