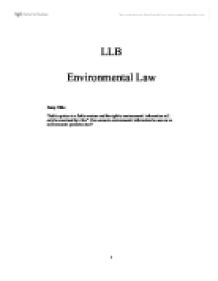 Hence, a distinction between 'interest' and 'value' is essential to environmental law. In what other way could the importance of a forest, or a mountain, be represented than through the way that these were 'valued' by individuals?19 Further, it was suggested that for a newer generation many concerns, which have appeared to be essentially to do with 'mere' amenity, have proved (on further research) to be more concrete and to involve real questions of harm to human interests. Often, such harm is uncertain at the time of development. Species depletion provides an example, as does depletion of natural habitats.20 Many of the most pressing current environmental questions resemble these instances of uncertain future harm. As such, they are increasingly perceived to be related to 'risks'. Those risks are difficult to relate to particular concrete interests, for reasons of uncertainty.21 As one would assume, risk assessments are carried out by sufficiently skilled decision-makers. However, there are huge discrepancies of judgement concerning the likely effects of development and likely consequences of any impact on the environment.22 An expert risk assessment can quantify the risks, but further deliberation is still needed given the remaining margins of uncertainty. 'Expert' risk assessment is only a partial solution, hence it cannot secure confidence that any given decision is a right one. ...read more.

As a result of development of public's understanding of environmental problems there is a growing reliance upon alternative mechanisms to secure environmental improvements, e.g. economic instruments, voluntary agreements.36 Frequently, fundamental concerns are now being addressed through concerted efforts by the different stakeholders, including the general public, by way of 'shared responsibility'.37 Conclusions Recently, citizens and citizen groups have been highly active in urging that more issues be placed on the agenda, and that new solutions be added to the list of possibilities once the questions are asked. Governments are beginning to take this role more seriously, and this should be seen as highly significant.38 Many of the problems encountered with the 1992 Regulations have been addressed through the clarifications found in the 2003 Directive and the transposing Regulations. The refining of certain definitions and extension of the scope and application of the Regulations in the light of experience should facilitate grater access.39 Nonetheless, although access to such information can communicate on a much wider basis now, it still has its limitation. In this essay it has been suggested that there are justifications that environmental protection will be improved by public participation. This is not just because it will improve procedural legitimacy, but also because where issues of value are concerned - decision-makers and the government need the public. Public participation is an important element in the justification of 'environmental democracy'.40 Word count: 2,200, excluding footnotes. ...read more.