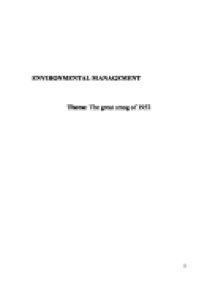 Environmental Management. The London smog of 1952 is one of history's most important air pollution episodes in terms of its impact on science, public perception of air pollution, and government regulation.

ENVIRONMENTAL MANAGEMENT Theme: The great smog of 1952 Table of contents The Great Smog of 1952 3 The Early 1900s 4 Introduction 4 Estimates of Influenza-Related Mortality 6 Sensitivity Analysis 7 The relationship between the Great Smog and the Sulphur Dioxide 8 Air Pollution During The Great London Smog, 1952 9 The Clean Air Acts, 1956 & 1968 10 Tall Chimneys 10 Urban Air Quality After The Clean Air Acts 10 Conclusion 12 The Great Smog of 1952 The Early 1900s Fog and smog frequencies began to reduce in UK urban areas during the early 1900s, compared with the latter half of the nineteenth century. Air pollution was still a severe problem but the number of major smogs began to decrease. Several changes helped to contribute to this situation, including: * changing social conditions; * tighter industrial controls; * declining importance of coal as a domestic fuel; * changes in fuel type - gas and electricity became alternatives to coal. Introduction The London smog of 1952 is one of history's most important air pollution episodes in terms of its impact on science, public perception of air pollution, and government regulation. The association between health and air pollution during the episode was evident as a strong rise in air pollution levels was immediately followed by sharp increases in mortality and morbidity. However, mortality in the months after the smog was also elevated above normal levels. An initial government report proposed the hypothesis that influenza was responsible for high mortality during these months. Estimates of the number of influenza deaths were generated using multiple methods, indicating that only a fraction of the deaths in the months after the smog could be attributable to influenza. ...read more.

The U.K. Ministry of Health estimated that 5,655 people died from influenza in the first 3 months of 1953 (U.K. Ministry of Health 1956). Another source reported 5,647 influenza deaths for the first 3 months of 1953 in England and Wales (World Health Organization 1953). To better understand the role of influenza and pollution in the deaths that took place in the months after the extreme episode, an estimate of the number of influenza-related deaths was constructed using information from the observations of a general medical practice and the vaccine trial. The population of Greater London at this time was approximately 8.6 million, based on the 1952 census (U.K. General Register Office 1951). Because early government reports attributed no deaths after 20 December 1952 to pollution and because mortality rates remained elevated for several months, especially for January and February 1953, we calculated the number of excess deaths from 21 December 1952 through 28 February 1953. During this period, 8,275 more deaths occurred than expected based on the previous year, which did not have an influenza epidemic or extreme air pollution events. Sensitivity Analysis The incidence rates generated through observations in a general medical practice are likely to be lower than the true incidence because some patients with influenza may not have consulted their physician. It is plausible that the underestimation is large if a significant number of patients with influenza did not consult their primary physician and he did not learn of their condition. In contrast, the case-fatality rate could be an overestimation, assuming the most ill patients sought medical care and few of the patients with influenza that did not receive medical care died. ...read more.

Figures for smoke and sulphur dioxide for Manchester for the winters (October - March) between 1960 and 1990 are shown in Table 2.2. Table 2.2. Winter Smoke And Sulphur Dioxide Concentrations, Manchester 1960-1990, Source: Lewis, 1995 Conclusion The Great Smog from 1952 is considered the worst air pollution event in the history of the United Kingdom and the most significant in terms of its impact on environmental research, government regulation, and public awareness of the relationship between air quality and health. Although London was accustomed to thick fogs, this one was denser and longer lasting than any previously seen. Visibility was reduced to a few yards ("It's like you were blind", commented one observer, making driving difficult or impossible. Public transport ground to a halt - apart from the London Underground - and the ambulance service stopped running, forcing the sick to make their own way to hospital. The smog even seeped indoors, resulting in the cancellation or abandonment of concerts and film screenings (as visibility fell in large enclosed spaces, and stages and screens became harder to see from the seats). Outdoor sports events were also affected. Initially, there was no great panic, as London was renowned for its fog. In the weeks that followed, however, statistics compiled by medical services found that the fog had killed 4,000 people. Most of the victims were very young, elderly, or had pre-existing respiratory problems. Deaths in most cases were due to respiratory tract infections from hypoxia, and due to mechanical obstruction of the air passages by pus arising from lung infections caused by the smog.The lung infections were mainly bronchopneumonia or acute purulent bronchitis superimposed upon chronic bronchitis. A total of 12,000 people are believed to have died in the weeks and months that followed. ...read more.