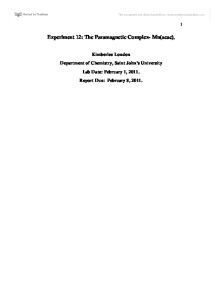 Experiment 12: The Paramagnetic Complex- Mn(acac)3 Kimberlee London Department of Chemistry, Saint John's University Lab Date: February 1, 2011. Report Due: February 8, 2011. Abstract: The manganese complex [Mn(acac)3] is an octahedral complex containing three bidentate ligands. Because each metal ion carries a +3 charge, and each ligand carries a -1 charge, the complex is electrically neutral. Tris(acetylacetonato)manganese(III) was prepared and used for magnetic susceptibility. The number of unpaired of electrons were determined through this process to assign the geometry and to gain information on the bonding between the ligand and metal. The Tris(acetylacetonato)manganese(III) complex had four unpaired electrons. The ligand was a weak field strength thus concluding in a high spin. Introduction: Magnetic susceptibility is the magnetic moment of an atom or ion due solely on its spin of N unpaired electrons. A substance has the ability to apply its own field within the magnetic balance, which will add (paramagnetic) or subtract (diamagnetic) to the applied field. [4] It is predictable that paramagnetic compounds will have unpaired electrons because they contribute by adding to the magnetic field of the balance by the electron's angular momentum (characterized as high spin). Therefore, diamagnetic compounds will have no unpaired electrons because the entrance to the higher sub-shells is too large for the electrons to overcome (characterized as low spin). ...read more.

I measured 0.76 grams. The balance must be zeroed. The balance was first calibrated. The constant was calculated to 1.0823. The temperature before and after the reading should be noted in order to see if any outside factors would be affecting the balance readings. The temperature remained fairly constant around 21?C. The balance reading for the empty tube, Ro was determined by inserting the tube and recording the out and in recordings. Next the tube was filled with sample of the Tris(acetylacetonato)manganese(III). The sample was transferred using a spatula and by gently tapping the tube against the desk. This was repeated until the height between 2.4-4.5 cm was obtained. The height of my sample was 2.90 cm. The sampled filled tube was weighed in order to determine the weight of the sample in the tube. The weight of the sampled tube was 0.87 grams. My total weight of sample used in the magnetic susceptibility balance was .11 grams. It was important to pack the sample efficiently so that an accurate reading can be taken from the balance. The final reading of the filled sample tube was taken. Also, the actual yield of the Tris(acetylacetonato)manganese(III) was measured to be 6.15 grams Results: Table 1: Data for Calibration (1169 std) ...read more.

Whether a metal has high or low spin depends on how strong the ligands and their splitting with respect to the metal. Ligands, which cause large splitting, ? , of the d- orbitals are referred to the strong field ligands. The spectrochemical series tells us how strong the ligands are with respect to the metal. We get splitting, according to the Crystal Field Theory, CFT. Mn(III) had 4 unpaired electrons. There was a weak field, thus resulting in high spin. Conclusion: The number of unpaired electrons can provide information about the bonding between the metal and the ligand. Determing the number of unpaired electrons is also useful for assigning symmetry. Octahedral ligands have the ability to cause a splitting of the orbitals. The spectrochemical series is a list of ligands that puts them in the order of their ability to cause large orbital separations. For d4 metals, Mn(III), two possible electron separations can occur depending on the gap, the field strength creating low or high spin. If the energy gap is large enough, all the electrons will be placed in the t2g (low-spin). If the energy gap is small, the four electrons will be paired in each orbitals first. Mn(acac)3 is a weak field/ high spin case. It has a configuration of 3 electrons in the t2g orbital and 1 electron in the eg orbital. In total there were 4 unpaired electrons. ...read more.