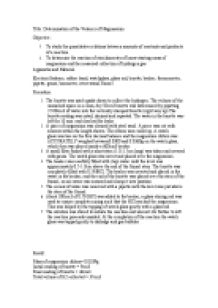 Experiment - determination of the valency of magnesium

﻿Title: Determination of the Valency of Magenesium Objective: 1. To study the quantitative relations between amounts of reactants and products of a reaction. 2. To determine the reaction of stoichiometry of know starting mass of magnesium and the measured collection of hydrogen gas. Apparatus and Material: Electrical balance, rubber band, watchglass, glass rod, burette, beaker, thermometer, pipette, gauze, barometer, retort stand, funnel Procedure: 1. The burette was used upside down to collect the hydrogen. The volume of the unmarked space in a clean, dry 50cm3 burette was determined by pipetting 25.00cm3 of water into the vertically clamped burette (right way up).The burette reading was noted, drained and repeated. The water in the burette was left for 10 min. and checked for leaks. 2. A piece of magnesium was cleaned with steel wool. A piece was cut with scissors within the length shown. The ribbon was curled up. A watch glass was tare on the four decimal balance and the magnesium ribbon was ACCURATELY weighed between0.0300 and 0.0360g on the watch glass, which then was placed inside a 600cm3 beaker. 3. A small filter funnel with a short stem (1.0-1.5cm long) was taken and covered with gauze. The watch glass was invert and placed over the magnesium. 4. The beaker was carefully filled with (tap) ...read more.

Stoichiometry provides the quantitative relationship between reactants and products in a chemical reaction. In this experiment, magnesium is used as the medium and the hydrogen gas release will be measured as the data for calculation of stoichiometry reaction. Magnesium reacts with hydrochloric acid to release hydrogen. The experiment conducted is to determine the value of X in the following equation. Mg + XHCl ? MgClx + X/2 H2 Magnesium which will be reacted with excess hydrochloric acid has a known amount, so when the displacement reaction when the two is reacted will release hydrogen gas and the amount of gas collected can be used as a data to calculate the value of x as the magnesium amount is limited, so the hydrogen gas evolved also are limited. Magnesium which is in the group 2 in periodic table is an alkali metal, which evolve hydrogen gases when reacted with acid. From the calculation, the value of X in the chemical equation between magnesium and hydrochloric acid was determined and the value of X is 2, the complete chemical reaction for magnesium and acid is Mg (s) + 2 HCl (aq) ? MaCl2(aq) + H2(g). An equation need to have the same number of atoms of the same kind on both sides of the equation to form a balanced reaction. ...read more.