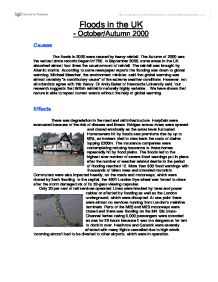 Floods in the UK - October/Autumn 2000 Causes The floods in 2000 were caused by heavy rainfall. The Autumn of 2000 was the wettest since records began in1766. In September 2000, some areas in the UK absorbed almost four times the usual amount of rainfall. The rainfall was brought by Atlantic storms. According to some newspaper reports the flooding was down to global warming. Michael Meacher, the environment minister, said that global warming was almost certainly "a contributory cause" of the extreme weather conditions. However, not all scientists agree with this theory. Dr Andy Baker of Newcastle University said, 'our research suggests that British rainfall is naturally highly variable... ...read more.

Commuters were also impacted heavily, on the roads and motorways, which were closed by flash flooding. In the capital, the 450ft London Eye wheel was forced to close after the storm damaged six of its 32-gass viewing capsules. Only 20 per cent of rail services operated. Lines were blocked by trees and power cables or affected by flooding as well as the London underground, which were disrupted. At one point there were almost no services running from London's mainline terminals. Parts of the M25 and M23 motorways were closed and there was flooding on the M4. Six cross-Channel ferries caring 6,000 passengers were stranded as sea for 20 hours because it was too dangerous for tem to dock in over. ...read more.

Police and council staff were drafted in to erect barriers on several routes into the towns and cities where the situation was not likely to improve for at least 24 hours. The devastation led to a visit from Tony Blair to emergency services staff in Shrewsbury in Shropshire, Bewdley in Worcestershire and York, areas most affected by the floodwater. The Prime minister admitted that more needed to be done to bolster flood defences. He said: 2Thousands of people up and down the country have been amazingly stoical in these circumstances... In the longer term, we have to try to work to deal with these problems on not just a national level but on an international level .We have to put in the right protection for people against the possibility of floods and work to deal with the issue of climat5e change." ...read more.