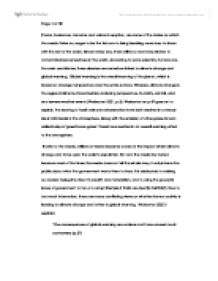 Global Warming. Due to too much information, there are many conflicting views on whether human activity is leading to climate change and further to global warming. Warburton (2001) explains: The consequences of global warming are unclear and have cau

Storms, hurricanes, tornados and volcanic eruption, are some of the stories on which the media thrive on, eager to be the first one to bring breaking news story to share with the rest of the world. Almost every day, there will be a new story related to natural disasters somewhere in the world. According to some scientists, humans are the main contributes; these disasters are somehow linked to climate change and global warming. Global warming is the overall warming of the planet, which is based on average temperature over the entire surface. Whereas, climate change is the regional climate characteristics, including temperature, humidity, rainfall, wind and severe weather events (Warburton 2001, p.5). Warburton on p.47 goes on to explain, the burning of fossil fuels and deforestation have both resulted in a steady rise in CO2 levels in the atmosphere. Along with the emission of other gases, known collectively as 'greenhouse gases' these have resulted in an overall warming effect to the atmosphere. Thanks to the media, millions of viewer became aware of the impact which climate change can have upon the world's population. But can the media be trusted because most of the times the media does not tell the whole story, it only informs the public about what the government wants them to hear. It is dedicated to making our society feel guilty about its wealth and materialism, and to using the powerful levers of government to for us to adopt lifestyles it thinks are best(Suttell 2007). Due to too much information, there are many conflicting views on whether human activity is leading to climate change and further to global warming. Warburton (2001) ...read more.

Just the predicted theories of decline associated with the Indus valley civilization, there are no real theories which support the fact climate change and global warming are the result of human activities, which in turn can backfire and result in the destruction of the earths' species, including humans, animals and plantation. Never the less, many theories continue to be formed, most of which state that the major contributers to global warming are carbon dioxide and pollutants released into the atmosphere (Waugh, 1995).the is no denying that the world's population is on the rise and so too is the demand for more houese, transport and technology.This in turn is resulting in the many harmful pollutants that are being released into the atmosphere, the direct cause of climate change. Whereas, Warburton(2001,p.53) explains, In the table on p53 you can see that water vapour and clouds) are responsible for 97% of natural greenhouse effect but this is not something that is considered the output of human activities. But Jones (2003 p.98) argures, most people would agree that fossil fuels are responsible for climate changes to some extent. But, Warburton (2001) counteracts by explaining; "Some scientists believe that if it were not for human interference and global warming, the earth would be approaching a cooler period and possibly another ice age". (p.35) Furthermore, Daily Telegraph 2009) states, if it wasn't for global warming this cold snap would happen much more regularly. Even with global warming we will have a cold winter every so often. It sometimes rains in the Sahara but it is still a desert (Daily Telegraph, 2009) ...read more.

As (Jones and wigley 1990) cited in Graves and Reavey(1996,p.16)explain, since the 19th century there have been temperature data available from weather stations throughout the world, yet it is surprisingly difficult to compile an accurate picture of changes in world temperature over the last century. There is no question about what needs to done on behalf of the humans. If they are to survive the predictions of scientists and meteorologists on global warming leading a big freeze in the temperature, because according to Singer, history, science, and our instincts tell us that cold is more frightening than warmth. The frightening concluding thought is; the new technology that bought the news of global warming is becoming part of humans' daily lives and is thus restricting them to operate on a level which they do not find possible to do with this technology. The earth can survive as lovelock and Stewart point out Gaia, the living and self regulating Earth will look after itself as always. It is hubris of us to think otherwise. We should not worry about earth we should be more worried about how we will survive what nature has in store for us. REFERENCE. Barr, G. (2007) Climate change: is the world in danger? Oxford: Heinmann Henson, R. (2006) the rough Guide to climate change. London: routledge Jones, G. (2003) people an environment: a global approach. Harlow: Prentice Hall Lovelock, J. (2006) revenge of Gaia. Prosser, R. (1992) Natural system and Human response. Walton-on-Thames: Nelson Singer. Suttell (2007) Weathermen cool to global warming. Crain's Cleveland business. Warburton, P. (2001) Atmospheric processes and human influence. 2nd Edition. London: Collins Education The water page. [Online], Available: www.africanwater.org/el_nino.htm [05 may 2010] Page 1 of 1 ...read more.