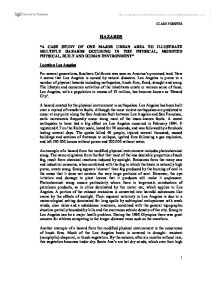 Hazards - A case study to illustrate hazards occuring in the physical, modified physical, built and human enviroment in Los Angeles.

HAZARDS "A CASE STUDY OF ONE MAJOR URBAN AREA TO ILLUSTRATE MULTIPLE HAZARDS OCCURING IN THE PHYSICAL, MODIFIED PHYSICAL, BUILT AND HUMAN ENVIRONMENT" Location Los Angeles For several generations, Southern California was seen as America's promised land. Now it seems that Los Angeles is cursed by natural disasters. Los Angeles is prone to a number of physical hazards including earthquakes, brush fires, flood, drought and smog. The lifestyle and economic activities of the inhabitants create or worsen some of these. Los Angeles, with a population in excess of 13 million, has become known as 'Hazard City'. A hazard created by the physical environment is earthquakes. Los Angeles has been built over a myriad of transform faults. Although the most violent earthquakes are predicted to occur at any point along the San Andreas fault between Los Angeles and San Francisco, earth movements frequently occur along most of the lesser-known faults. A recent earthquake to have had a big effect on Los Angeles occurred in February 1994. It registered 6.7 on the Richter scale, lasted for 30 seconds, and was followed by aftershock lasting several days. The quake killed 60 people, injured several thousand, caused buildings and sections of freeways to collapse, ignited fires following a gas explosion, and left 500 000 homes without power and 200 000 without water. ...read more.

72 000 hectares of brush and 295 houses were destroyed together with the loss of three human lives. In addition to these physical hazards there are many others related to the social and economic composition and life-styles of the area, such as the racial riots in Watts in 1965 and in central Los Angeles in 1992. Watts became known as a deprived area in the 1960's when riots occurred as a consequence of discrimination over housing, education and employment. The situation has altered relatively little since then. The riots in 1992 occurred following the acquittal of police officers that had beaten a black motorist. The riots, arson and looting that took place were the worst on record. A death toll of 54 was accompanied by more than 5,000 fires, serious damage to 10,000 buildings, property damage of $1 billion, and 14,000 arrests. The riots were a signal that problems in inner-city slums had not diminished. There are methods used to try and prevent certain hazards from causing large amounts of damage, but these methods sometimes contribute into causing a further hazard. For example, the use of high-pressure sprinkler systems to lower fire risk must be carefully monitored so that it does not lead to the soil erosion, which often occurs in combination with floods when a slope is laid bare by fire. ...read more.

Business may also be involved in insuring people and property against hazard, while public and voluntary organisations may meet the cost of hazard relief by providing compensation or aid. There are also the public movements, which direct the government's attention to particular hazards. There are the consumer movements in Los Angeles with its demands for greater car safety and the removal of lead from petrol. There is potential conflict between those living in the area and those visiting from outside whom in their ignorance may trigger off the event. These visitors have to be informed and warned. Information, preventative controls, management and relief all cost money. There is conflict as to whether those who live in the area should bear all the costs or whether those outside the area should also pay. The Government may play down a potential hazard as it may place public order ahead of public safety and see the disorder produced by the realisation of a hazard as presenting more danger to life and property than the hazard itself. Although people know about the threat of multiple hazards in Los Angeles they still continue to live there. This maybe because they do not have the money needed to migrate elsewhere, or have family roots in the area. People may not want to remain in these conditions, but because of their circumstances, are forced to do so. CLARE FORSTER 1 ...read more.