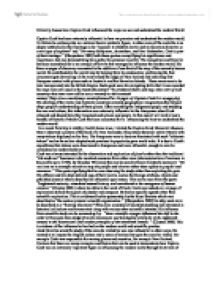 Critically Assess how Captain Cook influenced the ways we see and understand the modern World Captain Cook has been extremely influential in how we perceive and understand the modern world. To Britain he evokes pride as a national heroic symbolic figure, in other areas of the world he is as deeply enthralled in their heritage as he: "appears in children stories and in classroom histories as a new type of explorer" and "For many Europeans, Australians, and New Zealanders, Cook is part of their heritage." (Obeyeskere 1992) both these quotes exemplifying his significance and importance, but also demonstrating how global his presence was felt. The recognition and fame he has been accredited for is an example of how he has managed to influence the modern world. His three voyages of discovery accounted to the addition of one third of the map of the currently known world. He contributed to the world map by helping form its construction: performing the first circumnavigate (travelling all the way around the edge) ...read more.

The Europeans were to become fascinated with such "elaborate tattoos" and as the sailors adopted such practises its popularity grew world wide. It is due to Cook's expeditions that tattoos were discovered to Europeans and were influential enough to now be considered as modern body art. Cook was always interested In the observation and exploration of place's rather than the traditional "old south sea" buccaneer who wrestled resources from other areas (characterisation of mariners in the pacific up to 1750's. by Glyndwr Williams) this can be seen by Daniel Clayton's summary: "He was sent on a scientific mission to map the pacific and observe rather than exploit its peoples and resources." This quote signifying that he was observing for study rather than exploiting for gain. His officers and him kept detailed logs of their travels, and so the foreign artefacts, objects and published journals where described as influential upon return. This can be seen from the quote : "heightened curiosity, stimulated natural history, and contributed to the emergence of human sciences" (Clayton 2000.) ...read more.

I believe that there are many examples and factors that can be used to demonstrate how Captain Cook was an extremely important figure in influencing the modern world through his travels of exploration. He is also extremely modern today, the town of whitby for example, has a large amount of its income come from tourists visiting the area to visit monuments and the history of Captain Cook. However it is important to remember that while his reputation may be remembered as heroic and worth while, other accounts reside that tell tales of the conversion of the areas he visited to the British Empire being associated with "brutal and arguably genocidal effects." The Australian Aborigines myths such as the Batemans Bay in New South Wales could be used an example where his success was exaggerated: "Captain Cook arriving on a large ship... from which he disembarked to give the myth-teller's predecessors clothes (to wear) and hard biscuits (to eat), following which he returned to his ship and sailed away. Mumbulla told how his predecessors rejected Captain Cook's gifts, throwing them into the sea."(http://en.wikipedia.org/wiki/Australian_Aboriginal_mythology#Captain_Cook) Accessed 12/12/2009: http://www.bbc.co.uk/programmes/b00jcgpm http://www.cookmuseumwhitby.co.uk/the-museum/highlights/ http://en.wikipedia.org/wiki/Captain_cook http://www.mostlymaps.com/reference/The-Voyages-of-Captain-Cook/1st-voyage.php http://en.wikipedia.org/wiki/Batemans_Bay,_New_South_Wales ...read more.