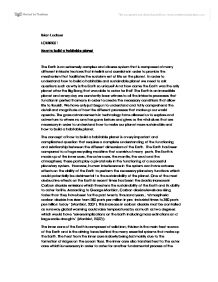 How to build a habitable planet

Brian Lockyer LCKBRI001 How to build a habitable planet The Earth is an extremely complex and diverse system that is composed of many different intricate features that interlink and correlate in order to provide the mechanism that facilitates the sustainment of life on the planet. In order to understand how to build a habitable and sustainable planet we need to ask questions such as why is the Earth so unique? And how come the Earth was the only planet after the Big Bang that was able to cater for life? The Earth is an incredible planet and every day we constantly bear witness to all the intricate processes that function in perfect harmony in order to create the necessary conditions that allow life to flourish. We have only just begun to understand and fully comprehend the detail and magnitude of how the different processes that make up our world operate. The gross advancements in technology have allowed us to explore and adventure to where no one has gone before and gives us the vital clues that are necessary in order to understand how to make our planet more sustainable and how to build a habitable planet. The concept of how to build a habitable planet is a very important and complicated question that requires a complete understanding of the functioning and relationship between the different dimensions of the Earth. ...read more.

This means that the crust becomes weaker as it is thinner than normal. This can happen to the oceanic crust in the ocean basins, but will only cause an earthquake with a hot spot. A hot spot is an abnormal hot rising area of the mantle that supplies the lava for volcanoes. If at the same time a hot spot is directly below a thinned crust then the magma in the hot spot may hold too much pressure to be held by the thinner weakened crust. If this is the case then the magma can penetrate the lithosphere, and eventually erupt on the surface. The action of the magma forcing its way up can trigger earthquakes as it breaks through the crust. When its breaks through the crust at the sea bed eventually a volcanic island will be formed in the middle of the ocean. A subduction zone is where two plates collide and one is forced below the other, they occur at convergent boundaries. They collide because of compression forces, pushing them into each other. One plate is subducted below the other into the mantle, where it will be recycled. An example can be seen by the subduction of the Pacific plate under the Eurasian plate. The collision of the Pacific and Eurasian plates causes a massive build up of pressure, as time progresses this pressure forces one of the plates (Pacific) ...read more.

Weaknesses in the ozone layer enhance the onset of global warming as the increased sunlight prevents carbon dioxide and other greenhouse gasses from escaping back into the atmosphere thus resulting in the warming of the planet. The Earth is an amazing place that is perfect for sustaining life. Our position in the solar system as well as the all the complex and dynamic processes that occur on the planet all interrelate in order to provide the perfect setting for the facilitation of life and make the Earth the habitable planet that we live in today. However, we must be careful not to abuse this amazing place that we have been given and in order to ensure future survival we must strive to accentuate the pros of sustainable development and the implementation of legislature and quotas that will reduce and control carbon emissions. By being proactive and taking a stand everyone has the ability to reduce his/her carbon footprint which is a necessity in reducing our impact on the environment, this can be achieved through the use of public transport or fitting catalytic converters or installing solar panelling. However in order to drastically reduce our global carbon footprint more radical measures need to be taken, these include the development of alternative forms of power such as wind, bio fuel, solar and nuclear power (Monbiot:,2007). ...read more.