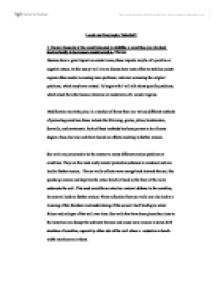 Human impacts at the coast intended to stabilise a coast line can alos lead inadvertently to increased coastal erosion. Discuss

Level one Geography Tutorial 2 1. Human impacts at the coast intended to stabilise a coast line can alos lead inadvertently to increased coastal erosion. Discuss Humans have a great impact on coastal areas; these impacts may be of a positive or negative nature. In this essay I will aim to discuss how mans effort to stabilise coastal regions often results in causing more problems, and ever worsening the original problems, which may have existed. To begin with I will talk about specific problems, which result from the human alteration or moderation of a coastal regions. Modification may take place in a number of forms there are various different methods of protecting coastlines these include the following, groins, jetties, breakwaters, Seawalls, and revetments. Each of these methods has been proven to be of some degree of use, but also each have knock on affects resulting in further erosion. Sea walls are perceived to be the answer to many different erosion problems at coastlines. They are the most costly coastal protection schemes to construct and can lead to further erosion. ...read more.

Groins are built at right angles to the shoreline. It is argued that groins only benefit areas in the up drift regions, and don't have a positive affects on the down drift areas. If this argument were correct erosion would seem be accelerated in down drift regions, therefore the greater number of groins that are constructed on a stretch of bay the greater the erosion down drift, for this reason groins in some locations are not encouraged. Although Groins do trap sediment, they can redirect beach material off shore. This occurs as currents around the structure force sand outwards to the end of a groin, this changes the topography of the surrounding area making it more complex and can lead to mounds of sand a the sea end of groins. Minikin (1952) suggested that groin arrangement and characters must be suited to the beach concerned. This suggests that groins can be affective if situated properly. Although this method of ceasing beach erosion can be very effective, its drawbacks are obvious. ...read more.

Breakwaters are constructed by strategically placing, offshore, a line of large boulders parallel to the shoreline. The effect these have is to limit the energy of the waves before in reaches the coastline and create an area of calm water behind them called a wave shadow. A breakwater off Santa Monica, California resulted in interference with the long shore drift; this produced a large deposition of sand behind the breakwater, and increased erosion down current. Up coast from breakwaters the shoreline may advance but in contrast to this the down drift side of the shoreline can erode quiet severely As well as this not enough research has been carried out as to where the best place to situate them is in respect to the beach, or cliff line. Conclusion There are many types of coastal defence schemes each of which have positive and negative affects on protecting land and property from the sea. Whatever man made features are made there is a good chance that they will interfere with the natural movements of beach sediments. This may lead to increased erosion in certain areas eventhough the structure was originally desighned to prevent this problem. ...read more.