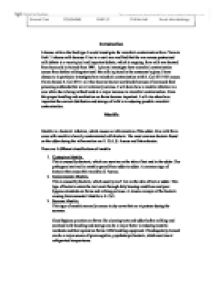 I choose milk as the food type I would investigate for microbial contamination from Farm to Fork.

Introduction I choose milk as the food type I would investigate for microbial contamination from 'Farm to Fork'. I choose milk because I live in a rural area and find that the raw versus pasteurised milk debate is a very topical and important debate, which is ongoing. Raw milk was banned from been sold in Ireland from 1997. I plan to investigate how microbial contamination occurs from before milking start until the milk is placed in the consumer's glass. I have chosen to in particular investigate how microbial contamination with E. Coli 0157:H7 occurs. I have chosen E. Coli 0157, as it has become known worldwide because of increased food poisoning outbreaks that are all extremely serious. I will show how a mastitis infection in a cow while she is being milked leads to a major increase in microbial contamination. From this proper handling and sanitisation on farms become important. I will also show how important the correct distribution and storage of milk is in reducing possible microbial contamination. Mastitis Mastitis is a bacterial infection, which causes an inflammation of the udder. Raw milk from cows with mastitis is heavily contaminated with bacteria. The most common bacteria found on the udder during the inflammation are E. Coli, S. ...read more.

Coli begin with the proper and effective cleaning of the milking parlour- cleaning and disinfection of udders and teats, cleaning and sanitisation of milking equipment and later storage areas especially transfer pipes. There are 5 main strains of Escherichia Coli * Classical Enteropathogenic E. Coli (EPEC) * Enteroinvasive E. Coli (EIEC) * Enterotoxigenic E. Coli (ETEC) * Enterohemorrhagic E. Coli (EHEC) * Enteradherent E. Coli (EAEC) Escherichia Coli 0157:H7 has been shown by studies to be able to survive for up to 150 days in soil and 90 days in cattle faeces (Cassteles, 1998). This particular strain of E. Coli is extremely deadly with only a small infection oral dose of one thousand organisms causing illness. Escherichia Coli 0157:H7 can cause severe damage to internal organs. Hemorrhagic Colitis is normally lasts between two and nine days with an incubation period of three to five days. Faecal shedding of the organism can last up to four weeks which is why any suspected cases of E. Coli food poisoning should be notified immediately with the suffers avoiding any food preparation etc. The second stage of E. Coli 0157:H7 food poisoning is Haemolytic Uremic Syndrome (HUS) ...read more.

I have come to the reckoning that raw milk being banned for human consumption is completely fair and correct as the risks associated with it are far to high. I also feel that more precautions should be taken in dairy farms to prevent bedding, manure etc being embedded in the cows udders prior to milking. I now feel that the preventive measures being enforced under the 1953 and 1956 Dairies Act are very fair and just. Conclusions On completion of this assessment I consider raw milk to be a major health risk to anybody who drinks it. I feel that that the risk associated with raw milk has dramatically increased in recent years and that the widespread serious outbreaks which have become public knowledge are a strong and constant reminder of the dangers of raw milk and its associated products. I have also learned that pasteurised milk has become safer and better over recent years. Flavour and smell have markedly improved. I found the information on milk to be widely available with easy access ensured to consumers. I noticed the raw milk versus pasteurised milk is quite a topical debate. I live in the countryside and found that the knowledge of the dangers of raw milk was quite low. I found the Food Safety Authorities website to be a major help with gathering and understanding information. ...read more.