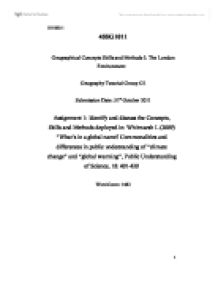 Identify and discuss the Concepts, Skills and Methods deployed in: Whitmarsh L (2009) Whats in a global name? Commonalities and differences in public understanding of climate change and global warming, Public Understanding of Science, 18

Since a random sample was used, any particular respondent had an equal possibility of receiving either version of the survey. The major issue with the survey is linked to demographics, whether the sample can be said to represent the UK public as a whole. Even though Whitmarsh (2009) states that the survey "represents a cross-section of socio-demographic groups" (Whitmarsh, 2009), the fact that "15 percent of the sample has no formal qualifications compared to 24 percent of the total population", challenges that claim. The returns were biased towards the more educated, a common characteristic of a postal questionnaire as it is normally the people interested in the topic who respond. Whitmarsh (2009) appears to overlook this fact and instead weights the data that produces results with no significant change. Nevertheless, an inaccurate representation of the publics understanding could possibly have come about because of this. Furthermore, the fact that the survey only covered Portsmouth strengthens the argument that the results are not accurate of public understanding of climate change across the UK as there is most definitely regional difference in understanding of climate change and global warming. ...read more.

Whitmarsh (2009) has highlighted the importance of the fact that "researchers must be aware that questionnaire wording will affect the responses given" (Whitmarsh, 2009), simply because there is no consistency of terminology in surveys/questionnaires used to research public knowledge or attitude to climate change/ global warming. Whitmarsh (2009) advises and expects that future research focused on public response should use explicit terminology that is not neutral and should not be used indiscriminately. By using a less restrictive, more qualatative and unprompted survey, Whitmarsh (2009) has allowed participants to express their understanding "in their own words" (Whitmarsh, 2009), and wants to make sure that future research has a greater use of more qualatative methods to explore understanding. Also, Whitmarsh (2009) suggests that researchers should not assume respondents share the same knowledge and terminology as themselves as "there might be a trade-off between scientifically accurate information and affective public engagement in climate change/global warming" (Whitmarsh, 2009). The methods used by Whitmarsh (2009) are appropriate and effective to the research concept being explored. The skills used by Whitmarsh (2009), made sure that the argument was logical and flowing, however an wider variation in data presentation would have been fitting. On the whole though, it was well structured and resulted in findings which are both important and interesting in relation to research on public understanding of climate change/global warming. ...read more.