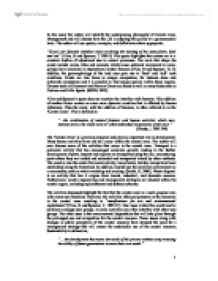 Identify the underpinning philosophy of Coastal Zone Management and will discuss how the UK is adopting this policy at a governmental level.

In this essay the author will identify the underpinning philosophy of Coastal Zone Management and will discuss how the UK is adopting this policy at a governmental level. The author will use quotes, examples, and definitions where appropriate. "Coasts are dynamic interface zones involving the meeting of the atmosphere, land and sea" (Viles, H and Spencer, T 1995:3) This quote highlights that coasts are in a constant rhythm of adjustment due to natural processes. The tools that shape the coasts include waves, tides and currents, which cause sediment movement to occur, giving rise to erosional or depositional coastal features (Viles, H and Spencer, T). In addition, the geomorphology of the land may give rise to 'hard' and 'soft' rock coastlines. Coasts are also home to unique ecosystems, for instance dune and saltmarsh ecosystems and it is possible to find unique species within these regions. Grasses such as Glasswort and Marram Grass can found as well as many birds such as Curlews and Little Egrets. (RSPB, 2005) Viles and Spencer's quote does not mention the interface with humans. This addition of another factor creates an even more dynamic coastline that is affected by human influences. Thus the coast, with the addition of humans, is often referred to as the 'Coastal Zone'. This is defined as: "...the combination of natural features and human activities which may interact across the whole zone or within individual components of the zone." (Doody, J, 2001:249) The 'Coastal Zone' is a precious resource and plays an important role in development. Many human activities have and still occur within the coastal zone. ...read more.

This enables UN member states, for instance the UK, to input the recommendation into national legislation. However, the Agenda is not legally binding, questioning its power to promote its vision. Within the United Kingdom, a number of different governmental departments, each with a particular focus, have different jurisdictions over the policy and management of the coastal zone. Firstly, The Department for Environment, Food, and Rural Affairs (DEFRA). This department deals with aspects such as coastal defence, fisheries, and water quality. Its aim is to protect or improve, particularly the marine environment, through sustainable management and through integration with governmental and international policies. The Department for Transport deals with the ports and shipping ensuring safe passage of ships and the control of pollution attributed to ships. The Department for Culture, Media and Sport (DCMS) handles aspects dealing with tourism, heritage, and recreational activity. According to the Atkins Report, 2004, the DCMS "...manage the 48 wreck sites in the UK currently designated under the Protection of Wrecks Act 1973."(Atkins, 2004:39). The Department for Trade and Industry manage offshore gas and renewable energies. However, similar to the Department for Trade and Industry the Office of the Deputy Prime Minister also implements a Strategic Environmental Assessment for projects to be established offshore. Since the UK joined the European Union in 1973, directives established by the European Commission influence the roles and responsibilities of each department along with national legislation implemented by the UK government. It is evident that each department monitors their interest in relation to a particular directive or legislation. ...read more.

Firstly, there needs to be effective communication between interest groups and an accurate scientific picture of the problem in order to formulate executive decisions along with effective policies. The idea of integrated coastal zone management through consultation prompts the idea that the coastal management process may involve consultation 'over-kill' and may result in plans being implemented at a too later stage followed by increased expenditure. Secondly, the sectoral authorities that exist in the United Kingdom would need to adopt the notion of transparency concerning information about the coastal zone. This could possibly suggest the need for the creating of a body to manage and monitor the UK's coastal zones, for instance a 'Coastal Agency'. Furthermore, the EU Directives that are in place may not be suitable enough for a coastal zone that is dynamic and ever changing. This poses another question about the purpose and practicability of the EU Directives in their role at indirectly or directly improving the coastal environment. Finally, although there are many complexities surrounding the coastal zone, it appears that the UK and the EU have moved from a notion of 'battling-with-the-sea' to a notion of understanding of coastal processes. This understanding has encouraged the review of current methods toward coastal zone management to one that is more inclusive of new ideas and technologies. In addition, a move to towards a common vision of sustainability is emerging, the basis of the ICZM philosophy. Although no strategy is or will be infallible, it will be the best available technique at that time and will be subject to scrupulous review and change. Furthermore, "Whatever mechanism is adopted, the achievement of ICZM...will ultimately depend upon political will. ...read more.