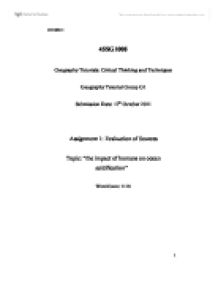 In this essay I am going to evaluate a range of sources that cover the topic of the impact of humans on ocean acidification and summarise the pros and cons of each source type.

4SSG1008 Geography Tutorials: Critical Thinking and Techniques Geography Tutorial Group G1 Submission Date: 17th October 2011 Assignment 1: Evaluation of Sources Topic: "the impact of humans on ocean acidification" Word Count: 1116 Introduction The term ocean acidification is used to describe the ongoing decrease in ocean pH caused by human CO2 emissions, such as the burning of fossil fuels (UK Ocean Acidification Research Programme, 2011). In this essay I am going to evaluate a range of sources that cover the topic of the impact of humans on ocean acidification and summarise the pros and cons of each source type. Discussion Articles published in peer-reviewed journals are considered to be of the highest quality. They must undergo a thorough review process, with multiple professional experts and reviewers involved. As a result of their expertise, data can be presented in a clear, factual and appropriate way. The use of peer review conveys a variety of opinions that can help remove any personal biases and at the same, highlight new ideas and innovation. The three journal articles I examined: (Hoegh-Guldberg et al., 2008), (Sponberg 2007), and Wood et al. (2008) have all been peer reviewed by both scientists and professionals in the field. For example, Hoegh-Guldberg et al. ...read more.

However, a problem with newspapers is that they are subject to media bias and often have political affiliations. As a result the language and attitude can differ from one paper to another as revealed in (Gray, 2009), and (Mckie, 2011). Also, newspaper articles are written in a style that will achieve their ultimate aim, the purchasing of the newspaper and in order to reach this, they tend to exaggerate evidence while using descriptive and dramatic language to interest their readers. NGO reports typically contain: valuable research, thorough analysis and useful conclusions. They may or may not go through the peer review process, but will be reviewed on the whole by scientists or graduates. Feely et al. (2006) hasn't been peer reviewed but instead is written by specialist scientists, scientists that have been cited in numerous publications. Even though not scientifically reviewed, it remains a credible source as a result of their expertise in the field. Harrould-Kolieb et al. (2010) on the other hand was reviewed by three expert scientists while Moss (2008), written by a science graduate wasn't reviewed at all and lacked any mention of important journals or organisations. NGOs are constantly working for political action or changes in policy and therefore reports have a pre-identified agenda, which can result in biased opinions. ...read more.