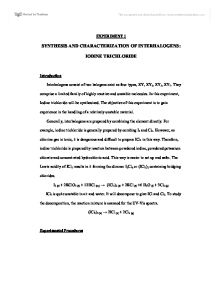 Interhalogens consist of two halogens exist as four types, XY, XY3, XY5, XY7. They comprise a limited family of highly reactive and unstable molecules. In this experiment, Iodine trichloride will be synthesized. The objective of this experiment is to gain

EXPERIMENT 1 SYNTHESIS AND CHARACTERIZATION OF INTERHALOGENS: IODINE TRICHLORIDE Introduction Interhalogens consist of two halogens exist as four types, XY, XY3, XY5, XY7. They comprise a limited family of highly reactive and unstable molecules. In this experiment, Iodine trichloride will be synthesized. The objective of this experiment is to gain experience in the handling of a relatively unstable material. Generally, interhalogens are prepared by combining the element directly. For example, iodine trichloride is generally prepared by combing I2 and Cl2. However, as chlorine gas is toxic, it is dangerous and difficult to prepare ICl3 in this way. Therefore, iodine trichloride is prepared by reaction between powdered iodine, powdered potassium chlorate and concentrated hydrochloric acid. This way is easier to set up and safer. The Lewis acidity of ICl3 results in it forming the dimmer I2Cl6 or (ICl3)2 containing bridging chlorides. I2 (s) + 2KClO3 (s) + 12HCl (aq) � (ICl3)2 (s) + 2KCl (s) +6 H2O (l) + 3Cl2 (g) ICl3 is quite unstable in air and water. It will decompose to give ICl and Cl2. To study the decomposition, the reaction mixture is scanned for the UV-Vis spectra. (ICl3)2 (s) � 2ICl (s) + 2Cl2 (g) ...read more.

Therefore, ICl3 is more stable than other XY3 compound. 2. Why does Iodine form the largest variety of interhalogen compounds? Iodine has the largest atomic size compared with other halogens. When it acts as the central atom in interhalogen compounds, it can bond with other halogen atoms with less repulsion between the bond pairs. Thus it can form more bonds with other halogens, compared with other central halogen atoms. For example, iodine can form maximum 7 bonds with 7 fluorine, while bromine can only form maximum 5 bonds with 5 fluorine. Therefore, it can form many different kinds of interhalogen. Moreover, the greater the difference of electronegativities between the central atom and the terminal atom is, the greater the number of terminal atom can be bonded to the central atom. As iodine has the lowest electronegativity among the halogens, the difference between iodine and the other terminal halogen atoms is always greater compared with other central halogen atoms. Thus it can act as the central atom in more kinds of higher halides than the others. Therefore, iodine forms the largest variety of interhalogen compounds. 3. Speculate as to what the decomposition products of ICl3 might be. The decomposition products of ICl3 might be iodine chloride (ICl) and chlorine gas (Cl2). ...read more.