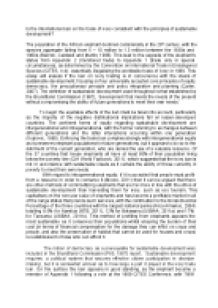 Is the international ban on the trade of ivory consistent with the principles of sustainable development?

﻿Is the international ban on the trade of ivory consistent with the principles of sustainable development? The population of the African elephant declined considerably in the 20th century, with the species aggregate falling from 5 ? 10 million to 1.3 million between the 1930s and 1980s (Barzdo, Caldwell and Martin, 1986). This lead to the upgrade of the elephant?s status from Appendix 2 (monitored trade) to Appendix 1 (trade only in special circumstances), as determined by the Convention on International Trade in Endangered Species (CITES, n.d); essentially illegalising the worldwide trade of ivory in 1989. This essay will assess if the ban on ivory trading is in concurrence with the ideals of sustainable development, focusing on four universally accepted core principles of equity, democracy, the precautionary principle and policy integration and planning (Carter, 2007). The definition of sustainable development used throughout is that established by the Brundtland Commission (1987), ?development that meets the needs of the present without compromising the ability of future generations to meet their own needs.? To begin the equitable effects of the ban must be taken into account, particularly as the majority of the negative distributional implications fall on lesser-developed countries. The pertinent forms of equity regarding sustainable development are intergenerational and intragenerational, with the former referring to exchanges between different generations and the latter interactions occurring within one generation (Vojnovic, 1995). Enforcing the trade ban complies strongly with intergenerational equity as it preserves elephant populations for future generations, but it appears to do so to the detriment of the current generation, who are denied the use of a valuable resource. ...read more.

Assuming however that the figure are at least somewhat correct it was found that although the rate of decline fell it did not stop entirely, with relatively recent estimates placing the population at 500,000 (Stiles, 2004). Whilst it may appear incongruous for the species total to have shrunk as opposed to grown it is analogous to that of the rhinoceros, of which all five subspecies were placed on Appendix 1 in 1976 with a combined population of roughly 65,000 (CITES, n.d). As of 2010 there is believed to be 40,000 (STR, 2010a), with the loss largely attributed to illegal trade to supply the huge demand for rhino horn as a component of traditional Chinese medicine (STR, 2010B). The continued reduction of a species population after it has been placed on CITES Appendix 1 indicates that adhering to the precautionary principle strongly may in itself be unsustainable, in which case a more lenient and nuanced interpretation of the approach may be required for the ban to entirely conform to sustainable development. The final primary principle of sustainable development is policy integration and planning. There are two primary systems used by CITES to inform all policy decisions: Monitoring the Illegal Killing of Elephants (MIKE) and the Elephant Trade Information System (ETIS), both of which measure and record levels and trends in poaching and trade. There are problems related to both bodies however; with ETIS chiefly weakened by inadequate reporting of illegal ivory seizures, many of which do not account for the amount apprehended (Reeve, 2002). ...read more.