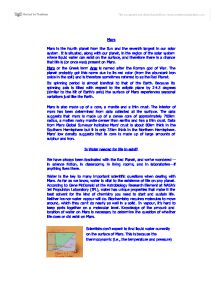 Mars Mars is the fourth planet from the Sun and the seventh largest in our solar system. It is situated, along with our planet, in the region of the solar system where liquid water can exist on the surface, and therefore there is a chance that life is (or once was) present on Mars. Mars or the Greek term Ares is named after the Roman god of War. The planet probably got this name due to its red color (from the abundant iron oxide in the soil) and is therefore sometimes referred to as the Red Planet. Its spinning period is almost identical to that of the Earth. Because its spinning axis is tilted with respect to the ecliptic plane by 24.5 degrees (similar to the tilt of Earth's axis) the surface of Mars experiences seasonal variations just like the Earth. Mars is also made up of a core, a mantle and a thin crust. The interior of mars has been determined from data collected at the surface. The data suggests that mars is made up of a dense core of approximately 700km radius, a molten rocky mantle denser than earths and has a thin crust. ...read more.

From this picture the lack of dissecting terrain next to the channel is obvious but puzzling. 2. Floods and Gullies As well as channels and drainage basins the evidence of large floods can also be found on mars (Figure 4.7) shows a satellite view of the 600km wide Tiu Valles. The flood originated at the bottom and flowed towards the top. You can see at the source the terrain is chaotic. Flooding was so intense that it cut through ridges, and wrapped around craters to form tear-shaped islands. Images obtained from the more recent Mars Global Surveyor mission show clearly that gullies exist on steep crater walls. Possibly formed by running liquid water. The source of the liquid water may have originated from frozen water within the layers (Figure 4.11) shows clearly the gullies and the layering along a sloping surface. In addition, high resolution images also revealed the many strange-looking layered terrain (Figures 4.13; 4.14; and 4.15). Are they the equivalent of the sedimentary layers on the ocean floors or lake beds on Earth? Further studies are necessary to determine these answers. 3. Polar Icecaps Both Martian poles have ice caps that advance and recede with seasons. ...read more.

This diversity of minerals in such a small area, formed under the presumed conditions, seem to make a non-biological origin unlikely. Finally, high-resolution scanning electron microscopy has revealed the presence of tiny "ovoids" which may actually be fossil remnants of tiny (20 to 100 nanometer) bacteria. However, much work will be done on this in the future, including searching for amino acids, other fossil structures such as cell walls, other types of fossils, and fossils of bacteria frozen in the act of reproducing. Mars is almost certain to have been warmer and wetter in its distant past, so the existence of primitive life has been a tantalizing possibility for some time, but the real search may be just beginning. So what if there is life on mars?! If life on Mars does exist (or have existed at some point in time), it would mean that the creation of life is not something that happens because of freak chance, but is in fact a probable occurance given the right conditions. Space agencies including NASA, ESA (the European Space Agency), and the Japanese Space Agency are even now sending the latest in a series of spacecraft to learn more about Mars and to look for evidence of water and life. In 2005, a Mars Sample Return mission will attempt to bring back likely candidate samples of minerals in which these kind of fossils would occur. ...read more.