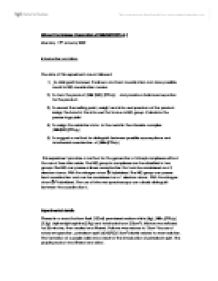 Nitrosyl Complexes: Preparation of [NiBr(NO)(PPh3)2 ] Monday 12th January 2009 Introduction and Aims The aims of this experiment are as followed: 1) To distinguish between the linear and bent coordination and draw possible metal to NO coordination modes. 2) To form the product [NiBr (NO) (PPh3)2] and provide a balanced equation for the product. 3) To record the melting point, weight and infra-red spectrum of the product. Assign the band in the infra-red that is due to NO group. Calculate the percentage yield 4) To assign the oxidation state to the metal in the nitroxide complex [NiBr(NO)(PPh3)2] 5) To suggest a method for distinguish between possible square planar and tetrahedral coordination of [NiBr2(PPh3)2] This experiment provides a method for the generation of nitrosyl complexes without the use of free nitric oxide. ...read more.

Measure the magnetic moment of [NiBr2(PPh3)2] at room temperature. The number that is nearest to the measured magnetic moment at room temperature gives the coordination of [NiBr2(PPh3)2] . e.g. say the magnetic moment at room temperature is 3.15�B for [NiBr2(PPh3)2] then the coordination is tetrahedral. The oxidation state of Ni metal is 2+. Where Br is -1,NO is -1 and PPh3 is 0. Additional learning Conclusion The experiment was a good method to determine the coordination of NO. The method allowed the aims of the experiment to be achieved. The only negative critic would be that the infra-red spectrum was that good. The peaks were not broad enough this could be due to the sample used for the infra-red not being prepared properly. A improvement would be to prepare a good sample for the infra-red. ?? ?? ?? ?? ...read more.