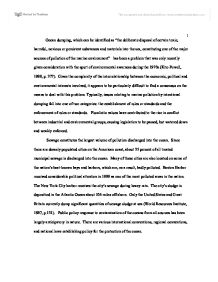 Ocean dumping, which can be identified as "the deliberate disposal of certain toxic, harmful, noxious or persistent substances and materials into the sea, constituting one of the major sources of pollution of the marine environment" has been a problem that was only recently given consideration with the spurt of environmental awarness during the 1970s (Kite-Powell, 1998, p. 377). Given the complexity of the interrelationship between the economic, political and environmental interests involved, it appears to be particularly difficult to find a consensus on the means to deal with this problem. Typically, issues relating to marine pollution by intentional dumping fall into one of two categories: the establishment of rules or standards and the enforcement of rules or standards. Pluralistic values have contributed to the rise in conflict between industrial and environmental groups, causing legislation to be passed, but watered down and weakly enforced. Sewage constitutes the largest volume of pollution discharged into the ocean. Since there are densely populated cities on the American coast, about 35 percent of all treated municipal sewage is discharged into the ocean. Many of these cities are also located on some of the nation's best-known bays and harbors, which are, as a result, badly polluted. Boston Harbor received considerable political attention in 1988 as one of the most polluted areas in the nation. The New York City harbor receives the city's sewage during heavy rain. The city's sludge is depositied in the Atlantic Ocean about 106 miles off shore. Only the United States and Great Britain currently dump significant quantities of sewage sludge at sea (World Resources Institute, 1987, p.131). Public policy response to contamination of the oceans from all sources has been largely anticipatory in nature. There are various international conventions, regional conventions, and national laws establishing policy for the protection of the ocean. International law has addressed the problem of ocean pollution. The UN Convention on the Law of the Seas, adopted in 1982, defines pollution of the oceans as The introduction by man, directly or ...read more.

Such values may be understood in different ways in different cultureal or material circumstances. For instance, a developer seeking to dispose of waste in the most economical way might want to dump it into the ocean, whereas a person enjoying the beach would strongly oppose dumping. Second, Crowder claims that the things that are valuable for human beings are plural or several. Many different goods are requiered for human flourishing, not just one. Values are themselves internally comples, containing distinct components that add further to moral diversity. The third component says that values are not only plural but that they are incommensurable with one another. The good of justice is a radically different thing from the good of nourishment because each makes its own distinctive claim . Lastly, these plural and incommensurable values may in particular cases come into conflict with one another. They may be incompatible or mutually exclusive, meaning that one can only be had at the cost of sacrificing another (p. 2). For example, diminishing waste dumping into the ocean is only obtainable by sacrificing a corporation's right to dump their waste. Because there are so many interests in society, all trying to reap benefits from the government, groups "inevitably come into conflict with each other" (Stone, p. 124). In the case of environmental policy, industrial interests tend to shy away from environmental regulations. Enviornmentalists complain about being outmaneuvered by industry during rulemaking and implementaion (King, 1986, p.303). The problem exists outside the EPA as well. In a study tracking the use of 500 million dollars in funds targeted for environmental studies, Freudenburg and Gramling (1994) found that the additional opportunites for input stemming from an open decision-making process did not prevent industry domination of decision making. As a result, "bureaucratic slipage" occurred and the braoad policy goals of environmental quality were "altered by successive reinterpretatation, such that implimentation bore little resemblance to the stated policies" (p. ...read more.

Additionally, commercial vessels release nearly all their waste into the ocean. These practices could produce the astonishing volume of 7 million tons per year (Weber, 1996, p. 139). Pluralism, in essence, captures the reasoning behind legislation and enforcement of environmental policy. Opposing factions, or interest groups are pitted against one another causing conflict. These groups, in the case of ocean dumping, are the idustrialists and the environmentalists. Both groups perceive the ocean as something of value, but because of different material circumstances they understand the value of it in different ways from one another. Idustrialists see the ocean as an economical, efficient disposal sight. It is the ultimate repository of virtually all pollutants and an appropriate method of municipal waste disposal, simply because of its convenience. Environmentalist value the ocean as a recreational or aesthetic treasure in which people should be able to enjoy without the hazards of pollution and dumping waste. Both groups are in conflict with each other over the issue of ocean dumping because both groups understand the value of the ocean differently. Many times, groups come to decisions on issues based on the costs that they will have to bare. It is obvious that large businesses will have to increase expenditures in order to find alternate means of waste disposal. Since bureaucracy is extremely influential towards policy development, it is not wonder that legislation on environmental policy gets watered down in Congress. Congress may incorporate impending fees for companies who don't comply with anti-dumping regulations, in spite of the fact that large coorporations can easily pay the fines and often times find that to be less costly than alternate means of waste disposal. Laws are also amended, such as the Ocean Dumping Ban Act of 1988, to provide easier access to ocean dumping rights. Recently, the Act was amended so that with the acquisition of a permit, sewage could still be dumped. Therefore, it is the conflict between opposing environmental groups and industrial groups that has shaped the policy of ocean dumping. . 2 1 ...read more.