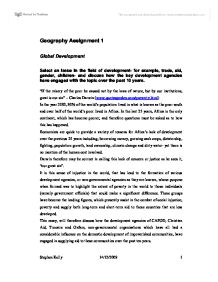 Select an issue in the field of development- for example, trade, aid, gender, children- and discuss how the key development agencies have engaged with the topic over the past 10 years.

Geography Assignment 1 Global Development Select an issue in the field of development- for example, trade, aid, gender, children- and discuss how the key development agencies have engaged with the topic over the past 10 years. "If the misery of the poor be caused not by the laws of nature, but by our institutions, great is our sin" - Charles Darwin (www.quotesgarden.com/poeverty.html) In the year 2000, 80% of the world's population lived in what is known as the poor south and over half of the world's poor lived in Africa. In the last 25 years, Africa is the only continent, which has become poorer; and therefore questions must be asked as to how this has happened. Economists are quick to provide a variety of reasons for Africa's lack of development over the previous 25 years including; borrowing money, growing cash crops, dictatorship, fighting, population growth, land ownership, climate change and dirty water- yet there is no mention of the human cost involved. Darwin therefore may be correct in calling this lack of concern or justice as he sees it, "our great sin". It is this sense of injustice in the world, that has lead to the formation of various development agencies, or non-governmental agencies as they are known, whose purpose when formed was to highlight the extent of poverty in the world to those individuals (namely government officials) ...read more.

Over the past decade Trocaire has been involved in numerous projects, mostly involving countries residing within the continent of Africa. "Trocaire has been working and responding to emergencies in the region [Kenya and Somalia] since the early 1990's and operates from an East Africa Regional Office in Nairobi, Kenya. In an immediate response to the current drought, Trocaire has established schools and therapeutic feeding projects in Somalia and general food distribution programmes in Kenya." http://www.trocaire.org/wherewework/countryprofile.php?id=50 In 1994 Trocaire opened its regional office in Mozambique, immediately helping in short-term with the food shortages among the communities in the north of the country, Trocaire then moved to develop on agricultural extension services to increase productivity, so to provide jobs for the local community and a structured economy for the country as a whole. Trocaire are not the only non-governmental organisation to make an impact on overseas countries over the past ten years; CAFOD engage also in similar projects, and are supported primarily from the citizens of England and Wales. CAFOD over the past 10 years have worked with more than 500 organisations worldwide to combat poverty. Though a diverse range of development work, CAFOD is helping communities build a better future for themselves. ...read more.

It is not, as poverty was before, the result of natural scarcity, but of a set of priorities imposed upon the rest of the world by the rich. Consequently, the modern poor are not pitied...but written off as trash. The twentieth century consumer economy has produced the first culture for which a beggar is a reminder of nothing" www.quotegarden.com/poverty.html In conclusion, the non-governmental agencies of CAFOD, Christian Aid, Trocaire and Oxfam have lead the way over the past decade successfully, with the help of various other organisations in the fight against global poverty. The combat of poverty, if it is ever to be completely successful, must be supported by all on a global scale, which would include the powerbrokers of western society, however the fear is that a war on poverty will never come about, while the leaders of such nations are wholly focused "on "making the pie higher" as President Bush called it in his own inimitable manner"(McCann, G, & McCloskey, S, 2003. P. 294). Appendix 1 The Poverty Cycle Breaking the Poverty Cycle Reference List Books Bartlett, S, and Hart, R, Satterthwait (1999), cities for children- Children's Rights, Poverty and Urban Management, London, Earthscan Publications McCann G, and McCloskey, S, (2003) From the local to the Global, London, Pluto Websites www.cafod.org,uk www.cafod.org.uk/resources/secondary_schools/aid_debt_and_trade/aid_factsheet_ks3_ ks4 www.Christian-aid.org.uk http://www.ids.ac.uk/ids/researchgateway/aid.html www.news.bbc.co.uk/cbbcnews/hi.newsid_407000/newsid_4077100/4077104.stm www.oxfam.org.uk www.quotesgarden.com/poverty.html www.tripurafoundation.org/enhancededucation.html www.trocaire.org http://209.85.135.104/search?q=cache:sXV0GOhAWSgJ:www.wdm.org.uk/campaigns/cambriefs/africacommission.pdf+an+example+of+uk+governments+supplying+overseas+aid&hl=en&gl=uk&ct=clnk&cd=6 ?? ?? ?? ?? 1 Stephen Kelly 14/12/2009 ...read more.