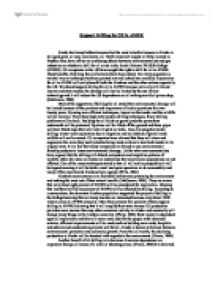 Support Drilling for Oil in ANWR

Support Drilling for Oil in ANWR Alaska had many hidden treasures but the most valuable treasure in Alaska is its liquid gold, or more commonly, oil. North America's largest oil field, located in Prudhoe Bay, have off-set an continuing debate between environmentalists and gas industries on whether to drill for oil or not in the Arctic National Wildlife Refuge (ANWR). Oil companies in the US have sought the right to drill for oil in ANWR. Many benefits of drilling that are believed have been stated. For every opposition a rational way or technique had been pointed out and looked into carefully. Exploration for oil in ANWR will really benefit both the Alaskans and the other nations especially the US. We should support drilling for oil in ANWR because not only will it boost income and state money, the damage will also be limited by the use of new technology and it will reduce the US dependence on oil making world oil prices drop. ...read more.

It is a fact that many companies are forced to use environmental-friendly products to lessen environmental damage. Unlike what environmentalists have argued, that the drilling will disturb ecosystems and migration patterns of wildlife, other drill sites in Alaska are indications that most animal populations are not affected. One of the many techniques stated is that oil will not be pumped but it will be tapped meaning it will be both a small and quiet operation to do successfully and many of the experienced Alaskans have agreed. (Wills, 2004) Alaskans most concern is to find stability between protecting the environment and making the most out of their natural wealth. (McGowan, 2004). They are aware that only about eight percent of ANWR will be considered for exploration. Meaning that less than half of one percent of ANWR will be affected by drilling. ...read more.

Another benefit of oil drilling is to decrease American dependence on expensive foreign oil incase of a crisis or shooting prices. (Pianin, 2004)It is believed that America should be oil-independent and self sufficient for that matter. Leading to an economic boom, drilling will dramatically lead to a lower oil prices. Not only will that oil help curb America's dependence on oil imports, but it will also generate money for the people. (Wills, 2004) The US imports about seventy percent of oil from other nations making it vulnerable to high oil prices and the prices are too costly. (World Book, 2000) In the end drilling is a huge benefit for Alaskans and the world, mostly the US. Drilling could easily be done without damaging the refuge ecosystem and given the oil production technology existing today, ANWR can be opened for drilling with all requirements acted upon. The best reason for permitting drilling in Alaska is not only energy independence, but the overall benefits it will produce for the American economy. ...read more.