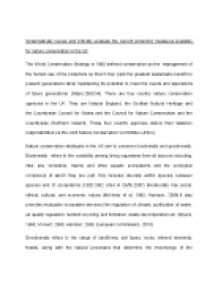 ﻿Systematically review and critically evaluate the current protection measures available for nature conservation in the UK The World Conservation Strategy in 1980 defined conservation as the ?management of the human use of the biosphere so that it may yield the greatest sustainable benefit to present generations while maintaining its potential to meet the needs and aspirations of future generations? (Gilpin,2000:54). There are four country nature conservation agencies in the UK. They are Natural England, the Scottish Natural Heritage and the Countryside Council for Wales and the Council for Nature Conservation and the Countryside (Northern Ireland). These four country agencies deliver their statutory responsibilities via the Joint Nature Conservation Committee (JNCC). Nature conservation strategies in the UK aim to conserve biodiversity and geodiversity. Biodiversity refers to the variability among living organisms from all sources including, inter alia, terrestrial, marine and other aquatic ecosystems and the ecological complexes of which they are part; this includes diversity within species, between species and of ecosystems (CBD,1992 cited in Duffy,2007) Biodiversity has social, ethical, cultural, and economic values (McNeely et al, 1990; Harrison, 2009).It also provides invaluable ecosystem services like regulation of climate, purification of water, air quality regulation, nutrient recycling, soil formation, waste decomposition etc. (Myers, 1996; Vincent, 2006; Harrison, 2009; European Commission, 2010). Geodiversity refers to the range of landforms, soil types, rocks, mineral elements, fossils, along with the natural processes that determine the morphology of the landscape. Geodiversity in UK is considered to be quite unique considering the size of UK (Vincent, 2006). Geodiversity is considered important not only because it forms a part of the UK's geological heritage, but also because it plays a vital role in safe guarding the nation's valued habitats and landscapes. ...read more.

which is intended to help achieve international, EU and local marine nature conservation goals (Rees et al, 2010). Generally, there is a difficulty in assessing the effectiveness of conservation measures adopted over the past decades in the UK. In majority of the cases, there is a difficulty in ascertaining or estimating what would have happened in the absence of the measures and also, there is a deficiency of statistical data pertaining to the current nature conservation measures (Gaston et al., 2006; Vincent, 2006). There is no doubt however that the legislations have been beneficial in many ways (e.g. the protection of certain habitats and organisms like wild bird species, bats, whales etc.). The protected area approach is considered as being central to the conservation of biodiversity and geodiversity (Gaston et al., 2006). Its importance has been acknowledged in various international conferences and reports concerning the environment (Bishop et al., 1995). The UNEP World Conservation Monitoring Centre declared that there are more than 100,000 protected areas worldwide representing about 11.5% of the total land surface of the globe (IUCN Vth World Parks Congress, 2003). Benefits of the protected areas include safeguarding places of outstanding natural wealth, beauty or cultural significance. They also provide for scientific, educational, recreational and spiritual needs of people (Bishop et al., 1995; Vincent, 2006). Though these are world views, they apply in the UK context as well since the public is encouraged to visit most parks and reserves. The main environmental benefit of protected areas is the maintenance of ecosystems, species diversity, genetic variation and ecological processes which are all essential for the sustenance of life (Bishop et al, 2005). ...read more.

of important factors outside the protected area zones (Jackson et al, 2009); the moving away from the ?island? mentality and linking the sites with the surrounding landscape (Rossler, 2005) and most popularly, adopting the ecosystem approach (Laffoley et al, 2004; Rossler, 2005; Rees, 2010). The ecosystem approach is to ensure that environmental, economic and social sustainability factors are given equal consideration during any decision-making process (Laffoley et al, 2004). Fortunately, the UK is keen on developing good mechanisms such as these and many initiatives are in the pipeline (Gaston et al, 2006). Already, the UK under the Marine and Coastal Access Act (2009) hopes to apply the ecosystem approach in designating Marine Conservation Zones (MCZs) (Rees et al, 2010). A major challenge however for the protected area approach is how the anticipated impact of factors like atmospheric emissions (e.g. nitrogen pollutants), isostatic adjustments of the British landmass and most notably climate change on ecosystems, biodiversity and geodiversity (Robinson et al, 2005; Vincent, 2006; Proser, 2010) can be mitigated. In conclusion, it cannot be determined categorically as at now whether the current protection measures for nature conservation in the UK have been largely successful or not, because of insufficient data. There are variable levels of achievements and failures brought about by the legislations and also variable results concerning the effectiveness of protected areas. Though it is evident that a lot more needs to be done, it cannot be denied that the current measures have already had positive results in various ways with regard to nature conservation. Considering the current trend of strengthening and clarifying legislations, attempts at better monitoring standards and initiatives to improve management practices of protected areas, the UK is definitely in the right direction and arguably well ahead of many parts of the world in this regard. ...read more.