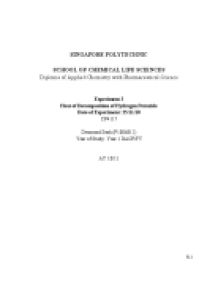 They are, however, useful only rough measurements are required. Therefore, in my humble opinion I would recommend the use of burette to measure out the volume of water needed to greater accuracy. Furthermore, the simple calorimeter we have used in the experiment poorly insulates the system from the surrounding and significant heat will be lost from the system to the surrounding. Therefore, we could stack two Styrofoam cups on top of one another in order to trap air and create a layer of insulation shown in figure 3 or even better if we can use bomb calorimeter. Figure 3: Suggested setup for simple calorimeter. Human errors such as slowness and parallax errors affect the reading. For instance, when we are told to cover the calorimeter immediately, there will still be delay of fraction of a second or more which will result in loss of heat and temperature will differ from the ideal. While taking reading from the thermometer or measuring out the volume of reactants need with measuring cylinder parallax errors might occurs and we have to careful while reading the meniscus level. All types of volumetric glassware have a cylindrical shape in the measuring region which causes the surface of most liquids whose volumes are to be measured to be curve downwards. Take reading from the bottom of the curved surface called meniscus with your eyes at the same level. To read the position of the meniscus, the eye must be at the same level as the meniscus, in order to avoid errors due to parallax. 6. Conclusion The objectives of this experiment such as the heat of decomposition of hydrogen peroxide, the heat capacity of calorimeter and enthalpy of decomposition of hydrogen peroxide were measured and calculated. The heat capacity of the calorimeter was 8.374J/oC and the enthalpy of decomposition of hydrogen peroxide was -89.9kJ/mol. Therefore, we have successfully met the literature value with an error of approximately 5.02%. Therefore, I have stated a few suggestions that may be put to use in if we can repeat the experiment to achieve a more accurate and precise value of enthalpy. 8. ...read more.