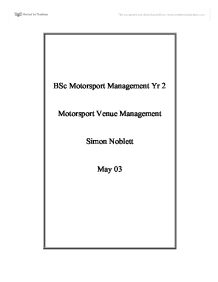 The Austrian Grand Prix attracted over a quarter if a million visitors in 2001. Discuss the access problems that result from staging a similar event in a region or country of your choice.

BSc Motorsport Management Yr 2 Motorsport Venue Management Simon Noblett May 03 Assignment Title: The Austrian Grand Prix attracted over a quarter if a million visitors in 2001. Discuss the access problems that result from staging a similar event in a region or country of your choice. Clearly indicating how the demand for transport could be managed successfully. The role of any commercial venue is to provide the services and facilities needed to host an event, whether it is a regular fixture or a one off special event. A venue can be anything from the backroom of a pub used to hold meetings to a huge multipurpose stadium complex. Many commercial venues will be well managed and highly flexible being used for a diverse selection of events. Such examples are Birmingham's NEC and Cardiff's Ice Rink. The NEC hosts a menagerie of events from trade shows like the Autosport show and is completely transformed and submerged in several feet of water for the International Boat Show. Likewise The Ice Rink is used daily for ice skating, stages regular ice hockey matches and figure skating events, but has also been subject to a make over and was unrecognisable when Godskitchen put on a dance event with a six thousand capacity at the start of April. Such flexibility is fundamental to ensure that the earning potential of a venue is maximised by having the venue in use as frequently as possible. ...read more.

But also like many other circuits due to its airbase heritage, it is in the middle of nowhere and as such it has suffered from poor transport links. Such is the demand for access to the circuit, that on race day Silverstone airport which is on the site of the circuit is the busiest airport in the country! The only access to the circuit is through Silverstone village which is a severe bottle neck on race weekends. Silverstone itself is a small village with only one road in and out. It can be reached via the A43 and has connections with both the M1 and M40 motorways. With this being the case there has been serious effort put into easing the problems in and around the circuit, infact all the way back to the motorways down which most of the traffic flows. The A43 aka the Dadford Road is the subject of major development. The work on and around the circuit has been broken down into several phases which pool the resources of the Government in terms of funding and the highways Agency, Octagon Motorsport, the venue's management, Sports Venue Technology, the company in charge of orchestrating the improvements and various other companies and organisations providing outside funding. Some of the points outlined in phase one of the Masterplan include: The existing two lanes of the Dadford Road being supplemented by the construction of two new additional lanes. ...read more.

By the time the spectators left for home, the fields were in such a state that many vehicles became bogged down and had to be pulled to safety. As a result of this chaos steps were taken to resolve the situation for the following years. The main action taking was the lifting of most of the turf in the temporary car parks so that a mesh could be laid under the surface and the turf replaced. This means that no matter how water logged the ground becomes the surface will be stable enough to cope with the volume of traffic imposed on it on race days. For venues to be successful and profitable in today's market place there is a constant need to find new uses for their facilities as well as the consolidation and improvement of the venue to retain current business. This often means that a venue will have to grow and expand with the popularity of the events that it hosts. It is this position that the Silverstone circuit has found itself in with the urgent need to improve it's transport access and parking facilities in order to retain the British Grand Prix, not only for the Silverstone circuit, but to keep the British Grand Prix on the F1 calendar in future years. It is also important that venues manage not only the profitability of its events, but try to minimise the side effects created by its business activities. ...read more.