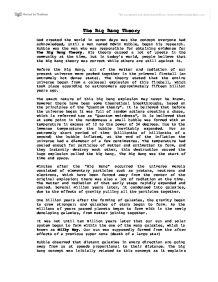 The Big Bang Theory God created the world in seven days was the concept everyone had acknowledged, until a man named Edwin Hubble, began his research. Hubble was the man who was responsible for obtaining evidence for The Big Bang Theory. His theory caused a lot of upsets in the community at the time, but in today's world, people believe that the Big Bang theory was correct while others are still against it. Before the Big Bang, all of the matter and radiation of our present universe were packed together in the primeval fireball (an extremely hot dense state). The theory stated that the entire universe began from a colossal explosion of this fireball, which took place according to astronomers approximately fifteen billion years ago. ...read more.

Due to the immense temperature the bubble inevitably expanded. For an extremely short period of time (billionths of billionths of a second) the bubble inflated, at the end of the inflation the universe had a diameter of a few centimetres. The temperature had cooled enough for particles of matter and antimatter to form, and they instantly destroy each other, this destruction caused the huge explosion called the big bang. The Big Bang was the start of time and space. Minutes after the "Big Bang" occurred the universe merely consisted of elementary particles such as protons, neutrons and electrons, which have been forced away from the center of the original explosion; there was also a lot of radiation at the time. ...read more.

Our sun was supposedly formed from the after effects of a previous super nova (death of a large star) Hubble observed that distant galaxies in every direction are going away from us at speeds proportional to their distance. The big bang concept was initially related to this concept as it explains why distant galaxies are travelling away from us at great speeds. The theory also predicts the existence of cosmic background radiation (the heat left over from the explosion itself). In 1964, the big bang theory received a major boost when Arno Penzias and Robert Wilson, who discovered that this radiation existed and was arriving in all directions in the same amount. Although many believe that this is how the universe was created the questions still remains that: Why did this explosion take place? Some may still prefer to call it an act of God. ...read more.