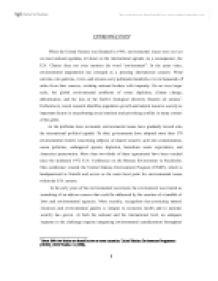 The current system of environmental governance is a diffuse process, spread through many different treaty bodies and other U.N. institutions. At present UNEP, is the primary environmental organ in the system.

INTRODUCTION When the United Nations was founded in 1945, environmental issues were not yet on most national agendas, let alone on the international agenda. As a consequence, the U.N. Charter does not even mention the word "environment". In the years since, environmental degradation has emerged as a pressing international concern. Wind currents, rain patterns, rivers, and streams carry pollutants hundreds or even thousands of miles from their sources, violating national borders with impunity. On an even larger scale, the global environmental problems of ozone depletion, climate change, deforestation, and the loss of the Earth's biological diversity threaten all nations.1 Furthermore, recent research identifies population growth and natural resource scarcity as important factors in exacerbating social tensions and provoking conflict in many corners of the globe. As the problems have worsened, environmental issues have gradually moved onto the international political agenda. To date, governments have adopted more than 170 environmental treaties concerning subjects of shared concern: acid rain contamination, ocean pollution, endangered species depletion, hazardous waste exportation, and Antarctica preservation. More than two-thirds of these agreements have been reached since the landmark 1972 U.N. Conference on the Human Environment in Stockholm. This conference created the United Nations Environment Program (UNEP), which is headquartered in Nairobi and serves as the main focal point for environmental issues within the U.N. system. In the early years of the environmental movement, the environment was treated as something of an add-on concern that could be addressed by the creation of a handful of laws and environmental agencies. More recently, recognition that protecting natural resources and environmental quality is integral to economic health and to national security has grown. At both the national and the international level, an adequate response to the challenge requires integrating environmental considerations throughout social, economic, and foreign policy-making. At the international level, the UN has taken the lead role to improve the global environment. Individual states are ill-equipped to deal with many of the environmental problems of today. ...read more.

The role of the U.N. should be to facilitate cooperation among these groups. Because these cooperative efforts are neither mandated nor monitored by the Secretary General or any other body, consistency with other U.N. programs and appropriate examination of priority issues is not ensured. This lack of coherence is similar to the problems articulated by those who bemoan the autonomy of specialized U.N. agencies.50 The benefits of autonomy outweigh the difficulties, however, since global problems of environmental protection cannot be easily categorized or simplified. A network of specialized agencies, each using their own expert scientific or academic viewpoint, will be uniquely informed on the constantly evolving scientific and technical environmental information. Breakthroughs in understanding are more likely to occur when groups are free to explore their own priorities. When, in the past, specialized agencies or UNEP have felt the need to coordinate on a specific issue, they have done so without direction from a centralized authority. A further advantage of autonomy is the ability of independent bodies to attract the best personnel, who frequently do not wish to work in a stifling bureaucratic system. Free to follow their own research agendas, scientific bodies have long been at the forefront of the environmental movement. Scientific data has taught the world about the destruction of the ozone layer, the rate of global warming, the decimation of species, the pollution of rivers and seas, and the nature of toxic or hazardous substances.51 Creative thinking is vital to the survival of the planet, and any structure that encourages free thinking is better than one that seeks to fit the pursuit of knowledge into an administrative chart or organizational table. Duplication of effort in and of itself is not harmful. Fear of duplication, therefore, does not justify additional U.N. supervision or accountability. In the new era of worldwide environmental concern, the U.N. should encourage diverse groups to contribute their specialized perspectives in the hope of discovering the best environmental solutions. ...read more.

enter into independent agreements with ECOSOC which define their status in the system. U.N. Charter arts. 61-72. 55 Presently, environmental matters are considered by the Second Committee of the General Assembly, which also reports on development and other issues. 56 Supra note 40. 57 This idea would require amendment of the U.N. Charter or to the constitutions of the specialized agencies. The Secretariat does not have such authority at the present time but this has hardly slowed down progress. For example, in the environmental field, certain specialized agencies such as the United Nations Educational, Social, and Cultural Organization (UNESCO) have worked tirelessly for decades on conservation of natural resources. Other specialized agencies such as the World Meteorological Organization (WMO), the Food and Agricultural Organization (FAO), the United Nations Fund for Population Affairs (UNFPA), and the World Health Organization (WHO) have collected data and formed teams of scientists from all over the world to understand and correct situations in which humanity's industrial and consumer behavior is adversely affecting the globe. 58 Regional organizations or bilateral treaties may be more effective than the U.N. in establishing environmental standards and in obtaining compliance by member states. The European Community's efforts in environmental action are exemplary. See, e.g., European Council Resolution on the Greenhouse Effect and the Community, 32 O.J. Eur. Comm. (No. C 183) 4-5 (1989), reprinted in 28 I.L.M. 1306 (1989). 59 The original phrase, "the common heritage of mankind", was used by Amb. Borg-Olivier's predecessor from Malta in the context of the law of the sea and the rich resources of the seabed. See G.A. Res. 43/53, reprinted in 28 I.L.M. 1326 (1989); UNEP Governing Council Decision on Global Climate Change, UNEP GC Dec. 15/36, reprinted in 28 I.L.M. 1330 (1989). 60 G.A. Res. 44/228, paras. 15(d) & (w), 49 U.N. GAOR Supp. (Sept.- Dec. 1989) at p. 15, U.N. Doc. A/44/746/Add.7 (1989). 61 G.A. Res. 44/227, 49 U.N. GAOR Supp. (Sept.-Dec. 1989) at 150, U.N. Doc. A/44/746/Add.7 (1989). ?? ?? ?? ?? 1 ...read more.