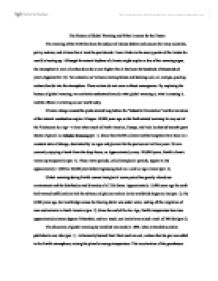 The History of Global Warming and What it means for the Future The warming of the Earth has been the subject of intense debate and concern for many scientists, policy-makers, and citizens for at least the past decade. From Alaska to the snowy peaks of the Andes the world is heating up. Although the natural rhythms of climate might explain a few of the warming signs, the atmosphere's level of carbon dioxide is now higher than it has been for hundreds of thousands of years (Appenzeller 10). For centuries we've been clearing forests and burning coal, oil, and gas, pouring carbon dioxide into the atmosphere. These actions do not come without consequence. By exploring the history of global warming, we can better understand exactly what global warming is, what is causing it, and the effects it is having on our world today. Climate change around the globe started long before the "Industrial Revolution" and the invention of the internal combustion engine. It began 18,000 years ago as the Earth started warming its way out of the Pleistocene Ice Age-a time when much of North America, Europe, and Asia lay buried beneath great sheets of glacial ice (Global Warming par. 1). Since then Earth's climate and the biosphere have been in a constant state of change, dominated by ice ages and glaciers for the past several million years. We are currently enjoying a break from the deep freeze, as Approximately every 100,000 years, Earth's climate warms up temporarily (par. 3). These warm periods, called interglacial periods, appear to last approximately 15,000 to 20,000 years before regressing back to a cold ice age climate (par. 4). Global warming during Earth's current interglacial warm period has greatly altered our environment and the distribution and diversity of all life forms. ...read more.

It is the second principle cause of atmospheric carbon dioxide (par. 6). The fires release more carbon into the atmosphere, fewer plants survive to convey carbon dioxide into oxygen, and scorched soil absorbs more heat and retains less water, increasing droughts (Adams 38). Thirty-four million acres of trees are cut or burned each year. We are losing rainforests along with temperate forests. "The temperate forests of the world account for an absorption rate of two billion tons of carbon annually. In the forests of Siberia alone, the Earth is losing ten million acres per year" (Montaigne 35). While carbon dioxide is the principle greenhouse gas, methane is second most important, only because there is less of it. It is more than twenty times as effective as carbon dioxide at trapping heat in the atmosphere (Kolbert 20). Levels of atmospheric methane have risen one hundred and forty-five percent in the last one hundred years (20). Methane is derived from sources such as rice paddies, bovine flatulence, bacteria in bogs and fossil fuel production. Most of the world's rice paddies, and all of the rice in the U.S., are grown on flooded fields. "When fields are flooded, anaerobic conditions develop, organic matter in the soil decomposes, and methane is released into the atmosphere, primarily through the rice plants" (22). Although most scientists believe global warming is the result of man-made pollution, there are those who believe that the Earth and other natural forces account for very little of the recent and rapid temperature changes. Global climate and temperature cycles are the result of a complex interplay between a variety of causes. Because these cycles and events overlap, sometimes compounding one another, sometimes canceling one another out, it is inaccurate to imply a statistically significant trend in climate or temperature patterns from just a few years or a few decades of data. ...read more.

But we know that good public health relies on a long list of factors-the availability of doctors and nurses, effective medicines, clean water, proper sanitation-and that even today, millions of people die every year of what should be preventable diseases. With global warming, you can expect the death toll to be even higher. (Gorman 45) "The climate of our past is our anchor for looking at the future," says paleoclimatologist Cathy Whitlock (qtd. in "Now What?" 75). "If we can understand the past linkages between the ocean, atmosphere, and biosphere, and determine which parts were the really big players in past sudden change, then maybe we can better deal with future surprises." Although Earth's climate has yet to be fully understood, computer technology has made big steps in predicting what the weather will be like in the near future. The warming doesn't mean that every place will suddenly become like Miami. Some areas, like the interior of the U.S., are likely to grow hotter and drier (Morell 75). Other areas, like China, Southeast Asia, and the western U.S., may get more precipitation but less snowfall (75). Sea levels around the world are projected to rise as the last of the glaciers melt. Intense hurricanes may occur more frequently and damage costal cities. Heat waves may become the summer norm (75). "We would need to get zero emissions to stabilize the carbon dioxide that's already in the atmosphere. That's not the path we, as societies, have chosen. Even if we were to stop carbon dioxide emissions now, we are committed to warming" (Kolbert 168). Taking into account the opposing argument that climate is changing of its own accord and humans have little to do with it, climate is still changing. In the end it's going to be a very different world. ?? ?? ?? ?? ...read more.