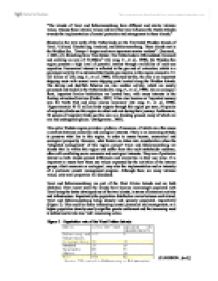 The islands of Texel and Schiermonnikoog have different and similar intrinsic values. Discuss these intrinsic values and how they may influence the Dutch attitudes towards the implementation of coastal protection and management in these islands

"The islands of Texel and Schiermonnikoog have different and similar intrinsic values. Discuss these intrinsic values and how they may influence the Dutch attitudes towards the implementation of coastal protection and management in these islands." Situated in the very north of the Netherlands are the five Dutch Wadden Islands of Texel, Vlieland, Terschelling, Ameland, and Schiermonnikoog. These islands rest in the Wadden Sea, "Europe's largest and most important marine wetland". (Enemark., J. 2003, p1). Stretching from 'Den Helder, The Netherlands to Bl�vandshuk, Denmark and covering an area of 13,500km2' (De Jong, F., et. al., 1999), the Wadden Sea region presents a high level of potential interest through availability of multi-use capacities. Economical interest is reflected in the gas and oil extraction, which is a prominent activity. It is estimated that Dutch gas reserves in this region amount to 72-221 billion m3 (De Jong, F., et. al., 1999). Followed by this, the area is an important shipping route with several main shipping ports located along the Wadden Islands. The shrimp and shellfish fisheries are also another activity, which are mostly processed and traded in the Netherlands (De Jong, F., et. al., 1999). On an ecological front, important bivalve habitations are located here, with many interests in the floating articulated bivalves (Cad�e., 2001). It has also become an 'important nursery area for North Fish and some marine mammals' (De Jong, F., et. al., 1999). 'Approximately 10-12 million birds migrate through this region per year; 50 species of migratory birds use this region to refuel and rest during their journey. Furthermore, 30 species of migratory birds use this area as a breeding ground, many of which are rare and endangered species.' (Bridgewater., 2003). This entire Wadden region provides a plethora of resources, of which can often cause a conflicts between economic and ecological interests. There is an increasing attitude to preserve what lies in this region, in order to ensure human, economical and ecological prosperity. ...read more.

Figure 3 - Map of Schiermonnikoog with inset (Google Earth., 2006) Both Texel and Schiermonnikoog are suffering from coastal erosion, influenced by tides and waves from the North Sea. However, in hindsight there intrinsic backgrounds differ. Texel offers greater diversity in multi-use capabilities, where economic activity is very dominant in this island. Schiermonnikoog presents a region dominated by the protection of the ecologically, although tourism is present, but not on such a scale as Texel. But which island is receiving the most attention concerning its coastal erosion? Which stakeholders have the choice in coastline management? Is there any bias in the decision making? In realisation of that increased populations and multi-user activities amongst Wadden Islands may imperil the sustainability of the Wadden Sea region, the Trilateral Wadden Sea Plant was established in 1997 between the territories of the Wadden Islands, Denmark, Germany and the Netherlands. This agreement sets a common vision of Wadden Sea integrated coastal management, where all 'policies, measures, projects and actions must be agreed upon by all members to achieve commonly agreed targets.' (De Jong, F., et. al., 1999). This agreement stretches from Den Helder, Netherlands to Bl�vandshuk, Denmark (Figure 4), indeed Texel and Schiermoonikoog fall within this agreement. Its aim is to 'achieve a natural and sustainable ecosystem in which natural processes occur in an undisturbed way' (De Jong, F., et. al., 1999). Figure 2 - The extent of the Wadden Area Plan and Conservation Area (De Jong, F., et. al., 1999. p20) The Wadden Sea Plan has many principles including the principle of avoidance; careful decision making; translocation; restoration and best available techniques. Stakeholders, for example local populations and traditional users are to have their interests weighted on a fair, unbiased way. To what extent does this theory get placed into practice? Is it possible that some interest groups' voices may not hold as much weight as others? The interest groups may never be able to assess whether or not their views have been treated equally. ...read more.

al., (n.d.), thus they are invaluable in natural coastal defence. Not much is known about the results of these actions and subsequent monitoring is taking place. It is apparent that the actions in Schiermonnikoog are in line with the trilateral policy. However, is this the best available technique in coastal management or an excuse to avoid protection in an island that does not have a high poplation distribution.In a cost-benefit analysis, this island and the measures involved to protect it is far less. In conclusion, it has been highlighted in the case studies that coastline line management varies between the two islands and is the result of coastal zone management practise in the Netherlands. It is apparent that the island methods of coastline management reflect the level of 'naturalness' of the landscape. Texel has shown a reworked landscape with high levels of development as a response of the numerous interest groups. This in-turn has shaped the island's intrinsic value and its level of importance. In terms of coastal defence, the landscape may not loan itself to 'natural' methods and it may also be 'risky' practice, as much of the island would suffer if this method were to fail. Instead, 'hard' coastal management is used in order to satisfy and secure human use. In theory the Dutch are sticking to what they know best in response to the interest groups, reflecting the attitude that man is a battle with the sea. Schiermonnikoog appears to be an area of trial and error, a place where 'risk' is less and where 'hard' measures may conflict with the homogeneity of the local environment. Indeed, who is to be harmed when 'natural' coastal management fails? With less to offer in terms of use value, the island has become a sanctuary for the 'natural'. Indeed natural processes and management are favoured, because it maybe the influence of man's coastal defence mechanisms that may create man-made coastal problems later on. The Dutch attitude here is one that works in collaboration with the sea. In terms of economics it far cheaper to maintain this island. ...read more.