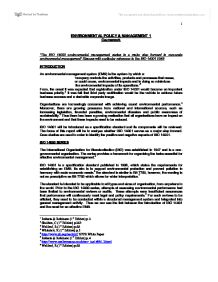 ENVIRONMENTAL POLICY & MANAGEMENT 1 Coursework "The ISO 14000 environmental management series is a major step forward in corporate environmental management" Discuss with particular reference to the ISO 14001 EMS INTRODUCTION An environmental management system (EMS) is the system by which a: 'company controls the activities, products and processes that cause, or could cause, environmental impacts and in doing so minimizes the environmental impacts of its operations.'1 From, the onset it was expected that registration under ISO 14001 would become an important business priority.2 It was felt that third party certification would be the vehicle to achieve future business success and a desirable corporate image. Organisations are increasingly concerned with achieving sound environmental performance.3 Moreover, there are growing pressures from national and international sources, such as increasing legislation, financial penalties, environmental disasters and public awareness of sustainability.4 Thus there has been a growing realisation that all organisations have an impact on the environment and that these impacts need to be reduced. ISO 14001 will be introduced as a specification standard and its components will be reviewed. The focus of this report will be to analyse whether ISO 14001 serves as a major step forward. Case studies are used in order to identify the positive and negative aspects of ISO 14001. ...read more.

There are five main benefits of ISO 14001. The first is that it cultivates involvement of top management which is significant because they are a difficult audience to reach.23Certification appears to be an issue of competitiveness and it has been predicted that it may become a prerequisite for business transactions. In 1998 the number of ISO certifications was relatively low. About 2,055 organisations received certification within the EU24and 2,017 outside the EU.25 However, larger organisations are now pushing ISO 14001 down the supply chain.26Rover has asked their 700 first tier suppliers to make a commitment to become certified under ISO 14001 therefore there is great potential for the number of certifications to rise. Secondly, ISO 14001 is attractive because it encourages a systematic and holistic approach to environmental management.27This is important because there is no government mandate that requires such an approach. Thirdly, a framework for continual improvement is established by the creation of time-lines and periodic compliance audits.28Fourthly, it could be argued that ISO 14001 attempts to encourage innovation by requiring environmental awareness and training of employees.29 Lastly, it improves compliance with legislation. VAUXHALL MOTORS (BSI 1998) Case Study30 According to Ken Davies:31 'Managing the environmental process has been rewarded by substantial cost savings which are likely to increase in the future' Since implementing ISO 14001 the company reduced its environmental impacts and has a motivated workforce.32By adopting sub-metering of electricity, individual sections of the factory were encouraged to take responsibility for their own fuel use. ...read more.

ISO 14001 be revised because of the value it places on top-down management.56 Teamwork and devolved decision-making tends to promote innovation and creativity and this was clearly illustrated by the success of the Rasa Sayang case study. Developing a role culture needs to be avoided because it tends to block the change required to remove the barriers which stop the incorporation of environmental considerations into business practices.57 CONCLUSION The importance of the ISO 14000 series cannot be denied: 'This is a significant milestone in the whole area of business and the environment'58 ISO 14001 differs from many traditional environmental regulatory systems since it allows organisations to focus on environmental efforts against internationally accepted criteria.59Thus allowing progress to be made towards achieving sustainable development. It could be argued that the major attraction of the ISO 14000 series is its flexibility and its ability to capture the attention and backing of top management.60 However, the standard is not without faults. There appears to be a lack of trust when it comes to believing the claims of businesses regarding the environment and the existence of an audit privilege does not help alleviate such worries. Furthermore, it cannot be forgotten that ISO 14001 only provides the minimum requirements for establishing an EMS. That said, at least the standard has managed to get companies to pay attention and get involved in the environment. ...read more.