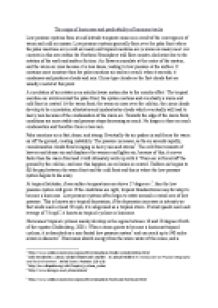 ﻿The origin of hurricanes and predictability of hurricane tracks Low pressure systems form at mid latitude temperate zones as a result of the convergence of warm and cold air masses. Low pressure systems generally form over the polar front where the polar maritime air (a cold air mass) and tropical maritime air (a warm air mass) meet. Air currents in this area within the Northern Hemisphere will flow counter-clockwise due to the rotation of the earth and surface friction. Air flows accumulate at the centre of the system, and the warm air rises because it is less dense, leading to low pressure at the surface. It contains more moisture than the polar maritime air and as a result, when it ascends, it condenses and produces clouds and rain. Cirrus type clouds are the first clouds that are usually created at this point. A circulation of air rotates in an anticlockwise motion due to the coriolis effect. The tropical maritime air swirls around the polar front, the system matures and eventually a warm and cold front is created. At the warm front, the warm air rises over the cold air, the cirrus clouds develop to be cirrostratus, altostratus and nimbostratus clouds which eventually will lead to heavy rain because of the condensation of the warm air. ...read more.

This source is normally found above the water in tropical waters. When the heat supply is cut off i.e when the hurricane begins to migrate northwards (or southwards), over colder water, it will weaken and die away. Heat from the oceans is the primary source of energy for hurricanes, [6]and so, the greater the heat of the SST [7]the more intense and frequent hurricanes in that area will be (Goldenberg, et al, 2001). Hurricanes don't usually develop far inland due to the lack of moisture.[8] If there is no moisture, then clouds are not likely to form. Cloud formation results in the generation of latent heat. Latent heat is the heat needed to initiate a change of phase i.e to a state of higher energy, e.g. from solid to liquid, or liquid to gas, in this context though, it's from liquid to a gas. As clouds are not generated as much, then not much latent heat is released. the majority of hurricanes originate and stay within the oceans, though they do occasionally travel inland, and the effects they can have on the environment, society and on the economy of the affected area are potentially devastating. The coriolis effect, which is a product of the earth's rotation is the reason that storms rotate and why a hurricane has a typical swirling formation. ...read more.