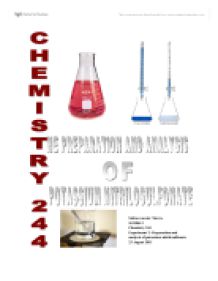 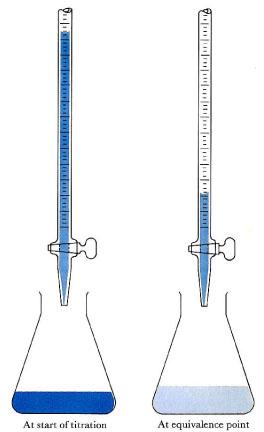 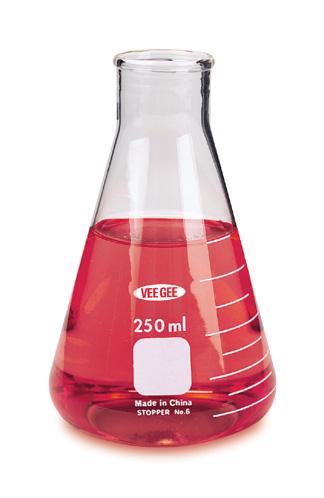 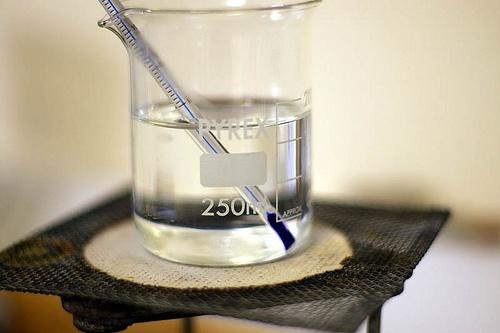 In the hydrolysis of PNS in acidic medium experiment about 0.5 grams of the PNS synthesised in the first experiment was weighed out and used to determine the percentage hydrolysis of PNS. The experiment was done in duplicate for more accurate results and was found that PNS hydrolysed 62.88% and 65.57% for 0.498 grams and 0.500 grams weighed out respectively. Taken the average of the two results it was found that the results showed similar percentages to previously studies. The results were tabulated on a result form.

The aim for the first part of the experiment was to synthesise potassium nitrilosulfonate. The sulfonic acid derivatives can all be prepared from the reaction between NH3 and SO3 but in this experiment another method was followed to prepare nitrilosulfonate (figure 1& Inorganic Chemistry 244 Practical Manual, 2011:8). The K2S2O5 is prepared in situ from the hydrolysis of potassium metabisulfate. It is significant to know that no information concerning the rate of hydrolysis and stability of the primary reaction product, the nitrilosulfonate, or of the intermediate, imidodisulfonate, has been recorded thus far. The synthesis of potassium nitrilosulfonate must be done in carefully controlled conditions for the experiment to be a success (Sisler & Audrieth, 1938:1947).

At the end of the experiment shiny, rhombic crystalline needles are formed and the pure salt can be stored in a desiccator for many weeks (Brauer, 1963:506). In acid mediums it is rapidly saponified to imidosulfonate and therefore all bisulfate must be removed with careful washing during the experiment.  Potassium nitrilosulfonate can also be saponified to amidosulfonate at boiling temperatures and therefore the temperature of the solution must be controlled at all times during the performance of the experiment (Brauer, 1963:506).

The aim of the second part of the experiment was to investigate the degree of hydrolysis of PNS in acidic medium. In alkaline medium the product does not hydrolyse appreciably and it can be prepared in relative pure form. In acidic mediums it hydrolyses rapidly at high temperatures (Inorganic Chemistry 244 Practical Manual, 2011:8). The rate of hydrolysis, however, decreases as the S-N bond length gets shorter. The hydrolysis experiment was performed in duplicate and the results (table 1) showed slight indifferences and could probably be explained by the fact of different temperatures or S-N bond lengths.

The results obtained in this experiment are summarised in below and in table 1 and can also be found on the attached sheets.

The double burette method is used when you want to record more than one volume reading and taking the average of it. In the hydrolysis of PNS however only one endpoint has to be determined and therefore only one volume reading is needed, thus the single burette method is applicable. Normally volume ratios would be compared but since we only need one volume for the PNS and one volume for the blank solution, we don’t need to compare any ratios to get an average result.

The PNS only need acidic medium and high temperatures to hydrolyse and therefore a standard HCl solution is not necessary for the PNS to hydrolyse. The standardisation would have been an unnecessary route to be taken.

With the addition of K2S2O5 to the boiled water not all the salt dissolved immediately but only after the addition of more water. This could probably have been because there were too many salt too react with too little water molecules. With the addition of the nitrite solution from the burette white crystals formed whilst stirring. With the continuous stirring the temperature raised rapidly which clearly indicates that this is an exothermic reaction. Concentrated ammonia has a very strong smell and has to be done in the fume hood. The solution must be kept strong alkaline to ensure that the nitrilosulfonate forms and not the imidodisulfonate. After filtering white crystals was obtained on the filter paper and was washed with ammonia and filtered again. It was then washed with ethanol and acetone and care had to be taken not to use it near any open flames because of its high flammability. The crystals were weighed and were found that 7.179 g was yielded with a percentage yield of 58.72%. In comparison with previous related studies the yield was slightly less.  This could be because of inaccurate work by weighing samples or adding too much or too less solution to the product. Furthermore the solution could not be cooled down completely before the cold ammonia was added or maybe not all the crystals were collected quantitatively with the spatula. The results could be improve by more accurate work and especially in the quantitative transfer of the crystals.

In the hydrolysis experiment the procedure was handled in duplicate and was found that PNS hydrolysed 62.88% and 65.57% with 0.498 g and 0.500 g PNS respectively. In relation to previous studies the results was more or less accurate but not consistent. The reason therefore could be that the 10.00 ml of HCl was not added accurately and therefore influencing the results. The other reason could be that the solution did not boil on the warm bath for exactly 20 minutes but rather too long or too short. Furthermore there could have been made errors in the blank titrations since the volume NaOH added was different from one another. So slight inaccurate errors in different parts of the experiment could have accumulated and resulted in the big 2.69% difference. To ensure improvement on the results, care must be taken to work accurate at all times especially when using burettes and to time correctly.