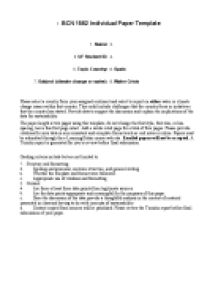 The recent water shortages in Spain have become a severe and lasting crisis.

﻿1. BCN 1582 Individual Paper Template 1. Name: 1. 1. UF Student ID: 1. 1. Topic Country: 1. Spain 1. Subject (climate change or water): 1. Water Crisis Please select a country from your assigned continent and select to report on either water or climate change issues within that country. This could include challenges that the country faces or initiatives that the country has started. Provide data to support the discussion and explain the implications of the data for sustainability. The paper length is two pages using this template; do not change the font style, font size, or line spacing; leave this first page intact. Add a works cited page for a total of four pages. Please provide citations for your data in any consistent and complete format such as: end notes or inline. Papers must be submitted through the e-Learning/Sakai course web site. Emailed papers will not be accepted. A Turnitin report is generated for you to review before final submission. Grading criteria include but are not limited to: 1. Structure and formatting 1. Spelling and grammar, sentence structure, and general writing. 2. Whether the template and format were followed. 3. Appropriate use of citations and formatting. 1. Content 1. Are there at least three data points from legitimate sources. ...read more.

This process is very energy intensive and involves significant emissions of greenhouse gases (Reuters 2007). Thus, we have a catch 22. While desalination is capable of providing enough clean drinking water to the area, it also produces a large amount of the gases that have caused the climate change that is responsible for the lack of water in the first place. Objectively weighing the pros and cons of desalination is not easy to do, on one hand you have an immediate and severe problem that needs to solved and on the other you have many potentially harmful effects that you may create by using this method. Another factor that must be taken into consideration is the large monetary price of building and operating such desalination plants. They are extremely expensive to operate and areas not on the immediate coast would have to have salt water transported over land to their plants. The high monetary cost coupled with the environmental costs make desalination a less than ideal solution to Spain?s problems. Without many other immediate options Spain has developed a network of desalination plants. There was a frantic expansion of desalination efforts during the 2005-2007 period. Since then the expansion has noticeably slowed (Global Water Intel 2008). Spain?s agriculture and environment minister blasted the previous administration in a speech for promoting large scale desalination efforts due to the fact that ...read more.

These facts make it a much more desirable and sustainable option than desalination plants. Spain?s water crisis will not be easily solved and there will be no one solution. It is going to take a dual effort from Spain?s government and the general population. The government needs to implement policies that encourage the conservation of freshwater, regulate the price of the water and improve the methods of delivery. This may cause financial strain to the country, but it is necessary for the future sustainability of its population and agriculture. At the moment, wastewater recycling seems to be the most viable and sustainable method to reduce the strain on the country?s freshwater supply and provide the agricultural sector with sufficient water for their crops. The people of Spain have to make a conscious effort to reduce their personal use of freshwater not only for monetary reasons, but also for the good of the entire population. Accountability needs to be preached in schools and beyond. Externalities to potential solutions also have to be taken into account. Spain cannot blindly implement policies that may be detrimental to the environment or people in the future. Climate and environmental conditions are only going to become less favorable so Spain needs to work quickly in relieving the water shortage and lowering its consumption to sustainable levels or continue to deal with its water woes in even more extreme levels. ...read more.