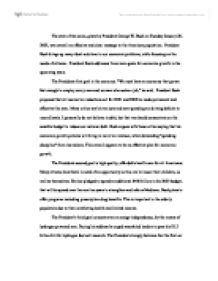 The state of the union, given by President George W. Bush on Tuesday January 28, 2003, was overall an effective and clear message to the American population.

The state of the union, given by President George W. Bush on Tuesday January 28, 2003, was overall an effective and clear message to the American population. President Bush brings up many ideal solutions to our economic problems, while focusing on the needs of citizens. President Bush addresses three main goals for economic growth in the upcoming years. The Presidents first goal is the economy. "We must have an economy that grows fast enough to employ every man and woman who seeks a job," he said. President Bush proposed that all income tax reductions set for 2004 and 2006 be made permanent and effective this year. ...read more.

This overall appears to be an effective plan for economic growth. The Presidents second goal is high quality, affordable health care for all Americans. Many citizens have been in need of an opportunity as this one to insure their children, as well as themselves. He also pledged to spend an additional $400 billion in his 2003 budget, that will be spread over the next ten years to strengthen and reform Medicare. Bush plans to offer programs including prescription drug benefits. This is important to the elderly population due to their conflicting health and limited income. ...read more.

Many Democrats along with members of the National Environmental Trust believe President Bush is merely trying to regain the swing voters in the 2004 election. "President Bush's environmental promises always come with Buyer Beware Sign," said Clapp. These proposed plans for hydrogen powered cars show great effectiveness for not only our environment but our communities. The three goals addresses by President Bush on economic growth appear to show effectiveness on having the ability to get the country out of its currents economic slump. Income tax reductions along with a stronger Medicare plan can begin to reform our countries economy. Citizens should take President Bush's state of the Union address as a clear message that he is not only able, but working to develop our country into a strong economic nation. ...read more.