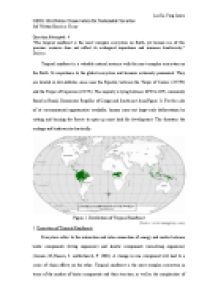 &quot;The tropical rainforest is the most complex ecosystem on Earth, yet human use of this precious resource does not reflect its ecological importance and immense biodiversity.&quot; Discuss.

ï»¿Lee Ka Ying Janice GEOG 1016 Nature Conservation for Sustainable Societies 3rd Written Exercise: Essay Question Attempted: 4 "The tropical rainforest is the most complex ecosystem on Earth, yet human use of this precious resource does not reflect its ecological importance and immense biodiversity." Discuss. Tropical rainforest is a valuable natural resource with the most complex ecosystem on the Earth. Its importance to the global ecosystem and humanis extremely paramount. They are located in low-latitudes areas near the Equator, between the Tropic of Cancer (23.5ºN) and the Tropic of Capricorn (23.5ºS). The majority is lying between 10ºN to 10ºS, commonly found in Brazil, Democratic Republic of Congo and South-east Asia(Figure 1). For the sake of its environmental opportunities available, human carry out large-scale deforestation by cutting and burning the forests to open up more land for development. This threatens the ecology and biodiversity drastically. Figure 1. Distribution of Tropical Rainforest (Source: www.mongabay.com) 1. Ecosystem of Tropical Rainforests Ecosystem refers to the interaction and inter-connection of energy and matter between biotic components (living organisms) and abiotic components (non-living organisms) (Loreau, M.,Naeem, S. andInchausti, P. 2002). A change in one component will lead to a series of chain effects on the other. Tropical rainforest is the most complex ecosystem in terms of the number of biotic components and their structure, as well as the complexities of the interactions between components. 1.1 Abiotic components Abiotic components include non-living elements, such as solar energy, air, soil, water and nutrients. ...read more.

Due to high level of urbanization, the world population and the living standard is both rising. Thus, the demand for tropical cash crops is increasing. This causes a rise in their prices and provides incentives for setting up more plantations. With the support of local government, huge tracts of tropical rainforest are being cut to make ways for plantations. This greatly accelerates the rate of deforestation. Figure 5 describes the palm oil production in Indonesia and Malaysia from 1964 to 2006. Both show a significant growth and this illustrates the rising importance of plantation to the countries' economies. But at the same time a greater destruction to the environment. Figure 5. Annual palm oil production by Malaysia and Indonesia from 1964-2006 (Source: mongabay.com) 3.2.3 Cattle Ranching A large area of rainforest is cut down to provide pastureland for cattle ranching. It can be regarded as the main source of soil deterioration (Sluyter 1996). Without vegetation cover, the pasture is not protected from heavy rain. Overgrazing occurs when excessive number of livestock is reared. This accelerates soil erosion and soil quality deteriorates. Cattle ranchers move to a new site and this causes a huge destruction to rainforest. 3.2.3.1 Reasons for rapid cattle ranching The demand for beef is extremely high nowadays due to an improving world's living standard. This applies especially for Brazilian beef which are cheaper and safer (not infected by livestock diseases) in international markets. Besides, local government often supports this activity. The environmental awareness in these countries is usually very low and they pay little attention on rainforest conservation. ...read more.