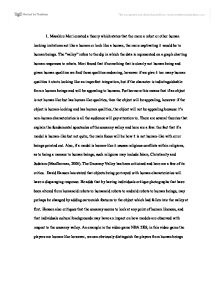 1. Masahiro Mori created a theory which states that the more a robot or other human looking imitations act like a human or look like a human, the more captivating it would be to human beings. The "valley" refers to the dip in which the data is represented on a graph charting human responses to robots. Mori found that if something that is clearly not human being and given human qualities we find those qualities endearing, however if we give it too many human qualities it starts looking like an imperfect integration, but if the character is indistinguishable from a human beings and will be appealing to humans. Furthermore this means that if an object is not human like but has human like qualities, then the object will be appealing, however if the object is human-looking and has human qualities, the object will not be appealing because it's non-human characteristics is all the audience will pay attention to. There are several theories that explain the fundamental spectacles of the uncanny valley and here are a few: the fact that if a model is human-like but not quite, the main focus will be how it is not human-like with error beings pointed out. Also, if a model is human-like it causes religious conflicts within religions, as to being a menace to human beings; such religions may include Islam, Christianity and Judaism (MacDorman, 2006). ...read more.

From a dictionary's definition, "familiarity is thorough knowledge or mastery of a thing, subject, etc." Familiarity in my opinion would be similar if not the same as emotional response. If an object or a person is familiar to someone, we automatically receive or give an emotional response to that person or to that object. Referring to the Uncanny Valley graph, the more a model is human-like, the more familiar it gets, until it reaches a point (uncanny valley) where it is lacking human like characteristics and we get a negative response because of our sensitivity to alleged inadequacies in close to human-like forms. According to a dictionary, "Realism the doctrine that objects of sense perception have an existence independent of the act of perception". Realism is anything that exists and is observable, accessible or understandable. Realism involves the believability of models on whether it is producing a reality with its characteristics, gestures, actions, interactions and so forth. Referring to the Uncanny Valley graph, the more human like an object, the familiarity increased, which meant it was that much closer to realism. When we reach the uncanny valley on the graph, we move further away from realism, and move closer to eerie and peculiar responses, but then right after we move closer to realism. I believe that as technology progresses, and then we are that much closer to realism and that much closer to creating human-like models. ...read more.

In addition to the paper on experimentation, Mori presented a study showing a human actor portrayed more repulsive that a robot. He also included a small-scale study showing that test subjects found a certain real-life human (actor Mitch Cohen as "The Toxic Avenger") to appear notably eerier than Hanson's robot replica of Philip K. d**k (Gellar, 2008)". If a real human was found more repulsive than a robot replica, than what is this to say about the uncanny valley? Well, I believe there's some truth to the uncanny valley, however it could also be an illusion with all of Hanson's evidence. An example would be video games, although the players are created human-like, it does not seem eerie in any way and people still purchase the game for entertainment. I don't agree with the hypothesis that extremely realistic but somewhat flawed models are responded to negatively by a majority. The chart provided is highly unscientific and the uncanny listings are not at all realistic like zombies, puppets and corpses. Possibly there is another cause for our revulsion to corpses, perhaps our fear of death? Chaminade states that as anthropomorphism rise than the movements of the characters should slowly be seen as 'natural'. Again contradicting with the uncanny valley, because the uncanny valley is not a linear pattern all along. If one were to sketch a graph on the basis of what Chaminade states, it would be a linear pattern. . ...read more.