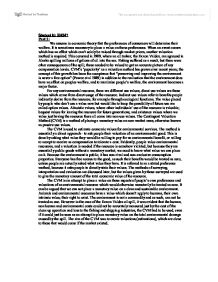 We assume in economic theory that the preferences of consumers will determine their welfare.

Student id: 324247 Part 1: We assume in economic theory that the preferences of consumers will determine their welfare. It is sometimes necessary to place a value on those preferences. When an event occurs which has an effect which can't solely be valued through market prices, another valuation method is required. This occurred in 1989, where an oil tanker, the Exxon Valdez, ran aground in Alaska spilling millions of gallons of oil into the sea. Fishing suffered as a result, but there were other consequences of the spill; these needed to be valued to get an accurate picture of any compensation levels. CVM's 'popularity' as a valuation method has grown over recent years; the concept of this growth has been the acceptance that "preserving and improving the environment is never a free option" (Pearce et al 1989) in addition to the realisation that the environment does have an effect on peoples welfare, and to maximise people's welfare, the environment becomes a major factor. For any environmental resource, there are different use values; direct use values are those values which come from direct usage of the resource. Indirect use values refer to benefits people indirectly derive from the resource, for example through ecological functions. The value placed by people who don't use a value now but would like to keep the possibility of future use are called option values. Altruistic values, where other individuals' use of the resource is valuable; bequest values for leaving the resource for future generations; and existence values where we value just having the resource there all come into non-use values. ...read more.

The opposite could occur if the surveyors were environmentalists. With Exxon Valdez, if the individuals were asked their WTP to avoid the spill and were also told the spill was could indirectly effect their water supplies or could alternatively increase oil prices, this would affect their valuation compared to if they had simply been asked for their valuation without the extra information about the spill. The individuals must also be sure of what they are being asked. They may express a WTP for a question because they believe the aim of the question to be something else, talking generally about an area, not for the desired subject. The hypothetical bias comes from the fact that the survey and payment is actually hypothetical. They do not actually have to pay, and so their WTP will be different to if it was an actual market. They may give high answers, especially if they believe that their answers may influence the future government policies for the environmental quality of that resource. The "warm glow" effect could also come into play here as people may give high values because giving 'for the social good' is morally good. Low results could be achieved if they believe their answers will affect how much they will eventually have to pay for the resource. For example, if individuals are told that a service will be provided if the total aggregated sum they are willing to pay exceeds the provision costs, and that each will be charged a price according to their respective WTP, each individual would have an incentive to understate their valuations. ...read more.

All the different methodologies have their drawbacks. None can be seen as 'correct', but just because they are imperfect doesn't mean they should be disregarded. CVM does have the added benefit of being able to combat most of its apparent deficiencies, while also being the only study to take into account non use values. The 'Blue Ribbon' Panel recommended certain aims for each CVM, assessing if the CVM was a good, legal possibility. They recommended certain guidelines, for example; a sample size of at least 1000 for a single open ended study; high non response rates would render the survey unreliable; a face to face interview being preferred; full reporting of data is required with test surveys going ahead; the WTP format is preferred with a design which is more likely to underestimate WTP than overestimate it. The Panel found that if these guidelines were adhered to, and could be proved in a Court of Law that the study was a fair and true one, it could be used in court as a valid valuation method and guide. It is apparent that a valuation method is required in certain instances where the market value cannot be determined, or indeed where there isn't a market. In the Exxon Valdez case, the effect of the spill were more than just the clean up operation costs and the like; the environmental damage caused by that leaked oil was far reaching and needed to have some sort of valuation placed on it to ensure possible correct compensation could be achieved. The valuations which can be achieved through these studies are essentially a guide as to the value people place on environmental resources. ...read more.