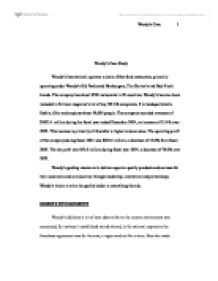 Wendy's Case Study Wendy's International operates a chain of fast food restaurants, primarily operating under Wendy's Old Fashioned Hamburgers, Tim Horton's and Baja Fresh brands. The company has about 9700 restaurants in 20 countries. Wendy's has also been included in Fortune magazine's list of top 500 US companies. It is headquartered in Dublin, Ohio and employs about 58,000 people. The company recorded revenues of $3635.4 million during the fiscal year ended December 2004, an increase of 15.4% over 2003. This increase is primarily attributable to higher volume sales. The operating profit of the company during fiscal 2004 was $226.6 million, a decrease of 45.8% from fiscal 2003. The net profit was $52.0 million during fiscal year 2004, a decrease of 78.0% over 2003. Wendy's guiding mission is to deliver superior quality products and services for their customers and communities through leadership, innovation and partnerships. ...read more.

This contributed to her delivery system. Wendy's turned out to be according to their own reporting, the fastest delivery system in the industry. In the 1980-89 Wendy's brought about a change in the management reorganization which was responsible for major restructuring, a move which shows adaptability in the operating environment. Wendy's operational focus will continue during 2005 with the rollout of the double-sided grill, which offers competitive advantages in improved product safety, enhanced product quality, faster cooking times and labor savings. Wendy's expect the double-sided grill to be implemented system wide by 2007. Along with the double-sided grill rollout, Wendy's is moving forward with the implementation of new technology in their Wendy's restaurants. Electronic payment, which is now in nearly all of their stores, is a convenience for their customers and results in a higher average check. As part of their store automation program, Wendy's have also implemented demand forecasting, labor scheduling and computer based training to improve their store-level efficiencies. Reference WWW.DATAMONITOR.COM, Wendy's International, Inc. SWOT Analysis, www.wendys-invest.com ?? ?? ?? ?? Wendy's Case 1 ...read more.