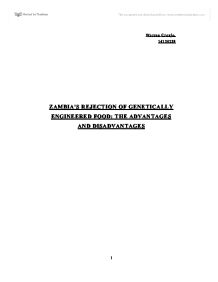 Zambia's rejection OF GENETICALLY engineered food: the Advantages and disadvantages

Warren Cronje. 14130238 ZAMBIA'S REJECTION OF GENETICALLY ENGINEERED FOOD: THE ADVANTAGES AND DISADVANTAGES CONTENT PAGE Introduction; 3 Advantages; 4 Disadvantages; 7 Conclusion; 10 Bibliography; 11 TABLE OF CONTENTS Introduction: There is famine spread across Zambia; 3-million people, almost a third of the population, need Food aid. Zambia rejected genetically modified maize from the United States [the biggest donor to the United Nations World Food Program (WFP)], calling it 'poison', even though the estimated maize deficit in Zambia is 575000 metric tons, out of an annual consumption of about 10 million tons. After continued pressure from the media, public and others. Levy Mwanawasa, and his government, sent a group of Zambian scientists to Europe, The United States and South Africa to research genetically modified food (GMF). Based on the scientist's findings, the cabinet decided to ban all GMF. The Zambian Agricultural Minister Mundia Skatana declared "in view of current scientific uncertainty surrounding the issue the country should refrain from actions that might adversely affect human and animal health as well as harm the environment." Many Zambians are not concerned about the 'unsafe' maize and have looted the genetically modified maize warehouse on numerous occasions. ...read more.

Environmental Risks: (HGT) and the transfer of 'selective markers' are an environmental risk because it could produce a new strain of pesticide resistant bugs and diseases. This would be harmful to not only genetically modified crops but also all crops; the new diseases could wipe out existing crops and have an impact on the world food deficit, increasing famine. There is also the concern that the pesticide resistant gene will spread to weeds, which will invade agricultural land. Scientist also have fears about the safety of livestock and wild life feeding on genetically modified plants. According to the Advisory Committee on Novel Foods and Processes (ACNFP), the gene can transferred from non-processed maize to bacteria that naturally live in the gut of farm animals. The concern is that this might allow gut bacteria to become resistant to antibiotic ampicillin, and that could lead to increased antibiotic resistance. Other risks include changes in herbicide patterns and squandering valuable pest susceptibility genes can damage our environment. Social, Cultural and Economic Problems: Many people are afraid that genetically modified food techniques create monopolistic practices. Cultural values will be threatened; many cultures believe that species are separate entities and that mixing these is unacceptable. ...read more.

They reduce the pressure to turn wilderness into farmland and provide hope that we can keep up with the nutritional demands of a hungry and growing world." Mwanawasa and his government's integrity is being questioned because of his decisions even though floods and droughts have left millions of people in desperate need for food aid, but so has politic malfeasance. According to a recent report by Transparency International, Zambia is the second most corrupt country in Africa. Conclusion: After researching this project, I have to disagree with the Zambian cabinets decision to reject genetically modified food, some might say my view is shortsighted because of the possible future dangers, but I think they should let the starving masses decide if they are willing to take the risk of possibly endangering there health. The Zambian government does not have to plant genetically modified crops, thereby reducing the environmental danger. All the risks are 'unlikely,' 'negligible' and 'theoretical' therefore there cannot be any major risks. The fact that scientists and scientific groups of the highest caliber offer there full support to genetically modified food research also makes Zambia decision even more alarming. To let 3-million people starve to death, because of 'negligible' risks does sound rather suspicious, and leads one to suspect ulterior motives. ...read more.