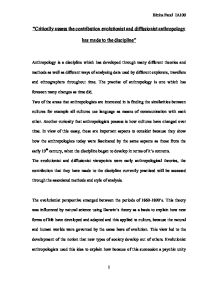 &amp;#147;Critically assess the contribution evolutionist and diffusionist anthropology has made to the discipline&amp;#148;.

"Critically assess the contribution evolutionist and diffusionist anthropology has made to the discipline" Anthropology is a discipline which has developed through many different theories and methods as well as different ways of analysing data used by different explorers, travellers and ethnographers throughout time. The practise of anthropology is one which has foreseen many changes as time did. Two of the areas that anthropologists are interested in is finding the similarities between cultures for example all cultures use language as means of communication with each other. Another curiosity that anthropologists possess is how cultures have changed over time. In view of this essay, these are important aspects to consider because they show how the anthropologists today were fascinated by the same aspects as those from the early 19th century, when the discipline began to develop in terms of it's contents. The evolutionist and diffusionist viewpoints were early anthropological theories, the contribution that they have made to the discipline currently practised will be assessed through the associated methods and style of analysis. The evolutionist perspective emerged between the periods of 1860-1890's. ...read more.

If those types of phrases were used today, they would seem highly offensive and ethically wrong. A cultural hierarchy was unavoidable especially with terms such as 'lower' and 'primitive' used to describe the people and the culture or society. Because of this perception, evolutionists saw culture as means of striving towards perfection (Nzimiro, 1979). Further critics are made on the methods used by anthropologists such as Tylor and Frazer. "Seen as some of the ethnological works of the time, where cranial measurement, descriptions of tools and implements, accounts of ceremonies...and anything else that might occur to the author are bundled together." Fortes (195: citied in Nzimino, 1979, pg 72). This demonstrates how scientific techniques were the main source of data collection. The data gathering and theorising was kept separate to make the sample more scientific. The diffussionist theory derived at a later date during the late 1890's. This type of theorising was not of as greatly associated with scientific nature as was the evolutionist approach. Instead the evolutionary elements were either minimised or neglected completely. The diffussionist approach stemmed from the belief that people's beliefs and habits could only be understood with knowledge of history. ...read more.

Since then modern day anthropologists also take out this point of view, with one of the interests of studies to note the refining similarities between cultures as well as within which is a fairly modern concept as it was not considered during both the evolutionist and diffusionist periods because the main concern was to find out where we came from. I think that in terms of great revelations that the diffusionist theory is what set the scene for the modern day method of studying. Ethnography is now a type of fieldwork that is highly acclaimed. /however rather than to conclude with simply stating how one theory helped the development of the present day discipline would be to ignore the workings of the other. The evolutionist approach's theory is one that is not really an aspect of cultural evolution that is taken into consideration as passionately a sit was when first derived. Without the methods being of so flawed (in today's terms) there would not be such a well credited method of data collection especially given the type of research, which exists now. Therefore it is fair to say that we have learned from our mistakes. ...read more.