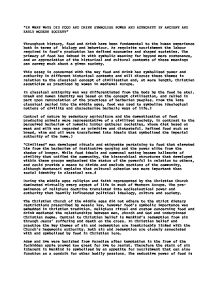 &amp;#147;In WhatWays Did Food and Drink Symbolise Power and Authority In Ancient and Early Modern Society?&amp;#148;

"IN WHAT WAYS DID FOOD AND DRINK SYMBOLISE POWER AND AUTHORITY IN ANCIENT AND EARLY MODERN SOCIETY" Throughout history, food and drink have been fundamental to the human experience both in terms of biology and behaviour. As requisite nourishment the labour required in food's production has defined economies and shaped societies. The primacy of food has imbued it with symbolic meaning far beyond mere sustenance, and an appreciation of the historical and cultural contexts of these meanings can convey much about a given society. This essay is concerned with the way food and drink has symbolised power and authority in different historical contexts and will discuss these themes in relation to the classical concept of civilisation and, at more length, Christian asceticism as practiced by women in medieval Europe. In classical antiquity man was differentiated from the Gods by the food he ate1. Greek and Roman identity was based on the concept civilisation, and relied in part upon renunciation of the practices of barbarian peoples. From the late classical period into the middle ages, food was used to symbolise Ideological notions of civility and characterise barbaric ways of life.2 Control of nature by sedentary agriculture and the domestication of food producing animals were representative of a civilised society, in contrast to the perceived barbarism of nomadic hunter gatherer societies, whose diet based on meat and milk was regarded as primitive and distasteful. ...read more.

of traditional female social roles. In the chapter from Food and Culture entitled "Fast, Feast and Flesh", Caroline Walker Bynum posits that the symbolic importance of food in religion during the late middle ages was differentiated by gender. She argues that woman's experience of power and authority was closely linked to her role in relation to the preparation and distribution of food, hence woman's religious devotion was more likely to be defined by food related practices than was that of their male counterparts. Bynum's assertion that scholars have ignored the centrality of food in women's religious experiences introduces a new historical paradigm in the study of female Christian asceticism in the middle ages.9 Bynum argues that fasting and Eucharist devotion were viewed by women and men of the middle ages as being predominantly female pathways to holiness. She cites several examples of female saints and holy woman who engaged in self starvation as a means of experiencing God with particular reference to the story of Saint Lidwina of Schiedam to develop her argument, as she acknowledges that there are difficulties with interpreting source material from this time due to a general lack of information as well as the distorted nature of hagiographical accounts of saints.10 However Bynum contends that food was such a crucial factor in the lives of women in the middle ages that its symbolism permeated all aspects of social and religious life, irrespective of the difficulties she mentions in substantiating evidence to support her argument. ...read more.