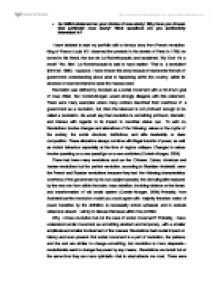 An initial statement on your choice of case study: Why have you chosen that particular case study? What questions are you particularly interested in?

* An initial statement on your choice of case study: Why have you chosen that particular case study? What questions are you particularly interested in? I have decided to start my portfolio with a famous story from French revolution. King of France Louis XVI observed the protests in the streets of Paris in 1789, he turned to his friend, the due de La Rochefoucauld, and exclaimed, 'My God! It's a revolt!' 'No, Sire,' La Rochefoucauld is said to have replied. "That is a revolution" (Kimmel, 1990). I suppose, I have chosen this story because it represents the lack of government understanding about what is happening within the country, within its structure or even incoherence what the masses need. Revolution was defined by Goodwin as a social movement with a minimum goal of coup d'�tat. But Conteh-Morgan would strongly disagree with this statement. There were many examples where many soldiers described their overthrow of a government as a revolution, but often the takeover is not profound enough to be called a revolution. He would say that revolution is something profound, dramatic, and intense with regards to its impact in countries status quo. To add on, Revolutions involve changes and alterations of the following: values or the myths of the society; the social structure; institutions; and elite leadership or class composition. These alterations always combine with illegal transfer of power, as well as violent behaviour especially at the time of regime collapse. Changes in values involve operating on a new paradigm or a new worldview (Conteh-Morgan, 2004). There had been many revolutions such as the Chinese, Cuban, American and Iranian revolutions but the perfect revolution, according to Stanislav Andretski, were the French and Russian revolutions because they had the following characteristics: overthrow of the government by its own subject (people); the old ruling elite replaced by the new one from within the state; mass rebellion, involving violence or the threat; and transformation of old social system (Conteh-Morgan, 2004).Probably, from Andretski perfect revolution model you could ...read more.

Labour movement preached workers and promoted the idea of social equality. The proletariat saw how capitalists grew their capital and even more how working class people were exploited by the bourgeois. People understood this movement as opportunity to make a change in the structure (Figes, 1996). After 1905 revolution the Bolsheviks and the Mensheviks (August, 1903, the Social Democratic Party was established) agreed to overthrow Tsars power, transform Russia into a democratic bourgeois republic and in turn overthrow it by a socialist revolution. The Bolsheviks, led by Lenin wanted a small party consisting of highly-disciplined and devoted professional revolutionaries. The Mensheviks wanted a mass party consisting of both active supporters and non-active sympathizers. This split between the Bolsheviks and the Mensheviks was formalized in 1905 and deepened in 1912 when the Bolsheviks expelled the Mensheviks from the party (Pipes, 2001). Public dissatisfaction was at its zenith just before the 1917 revolution. Conteh-Morgan claims that all governments tend to hide inner country problems with external conflicts as in the Russian revolution case. Majority of government spending increased due to the World War I. The Tsar concentrated factories to produce guns and arms but not bread for starving nation. All these contentions between the Tsar and nation imply that social revolution started, which demanded rapid transformation of society. Many strikes occurred and showed dissatisfaction by the proletariat. Nicholas II demanded his garrison to repress social upheaval. But his garrison turn back on him and joint rebellions, the Duma refused to recognize Tsars authority. There were no bystanders everyone had to decide on whose side to be. Majority of people showed solidarity against monarchy (Figes, 1996). After revolution there were disagreement how and who should governed the country. The Provisional government lacked of unity and it was a good opportunity for the Bolsheviks to absorb the power. After they did it Lenin understood that they can keep the power only by force. ...read more.

Firstly the French revolution was influenced by the thinkers of the Age of Enlightenment afterwards the Russian revolution by Karl Marx ideas. Moreover, the Russian revolution was a starting point and sort of proof that it is possible to change social structure. I strongly agree with Skocpol's and the other scholars' statement that revolution had/has a similar model. Especially, when I was analysing the Means and Ends in ethical terms. I reckon it was the hardest part of portfolio because all revolutions are violent. Revolutions do not mercy anyone and any subject to reach the object is justifiable. But then I had to look at it from moral point of view - then everything turns up side down because every mean in revolution is amoral. What I did not enjoy about the revolution was its outcomes. As revolution is very optimistic movement. People try to overcome the power of the state. The state it self is an organisation which created the structure. The authority has a power to control the police, the army and the jurisdiction. And the if social movement aims to changes the structure of country they have to overcome all obstacles ( example. such as police) which are legislative People were struggling and suffering; many were torched and millions died for what they believed was unjust, for the change in state structure. However, Russian revolution it happened the same as in the French or Chinese revolutions. The state became stronger, more centralized and the system even more unjust. Kimmel claims the paradigm case of revolution finishes post revolutionary reign of terror and its end, 'Thermidor'. In particular Leon Trotsky refers to the rise of Stalin and the accompanying post-revolutionary bureaucracy as the 'Soviet Thermidor'. Finally, I agree with Kimmel who claims that 'The study of revolution requires strategic analytic and intellectual choices and also the explication of our moral and political position' (pg. 15). Moreover we have to study revolutions with engaging ourselves in the process and we cannot remain dispassionate. Generally, revolutions were cruel and there were no bystanders due to it we should not be indifferent about revolution. ...read more.