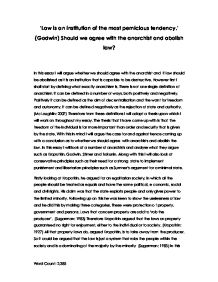 Law is an institution of the most pernicious tendency. (Godwin) Should we agree with the anarchist and abolish law?

'Law is an institution of the most pernicious tendency.' (Godwin) Should we agree with the anarchist and abolish law? In this essay I will argue whether we should agree with the anarchist and if law should be abolished as it is an institution that is capable to be destructive. However first I shall start by defining what exactly anarchism is. There is not one single definition of anarchism; it can be defined in a number of ways, both positively and negatively. Positively it can be defined as the aim of decentralisation and the want for freedom and autonomy. It can be defined negatively as the rejection of state and authority. (McLaughlin: 2007) Therefore from these definitions I will adapt a thesis upon which I will work on throughout my essay. The thesis that I have come up with is that the freedom of the individual is far more important than order and security that is given by the state. With this in mind I will argue the case for and against hence coming up with a conclusion as to whether we should agree with anarchists and abolish the law. In this essay I will look at a number of anarchists and analyse what they argue such as Kropotkin, Godwin, Stirner and Bakunin. Along with this I will also look at conservative principles such as their need for a strong state to implement punishment and libertarian principles such as Sumner's argument for a minimal state. ...read more.

(Bakunin: 1882) Here Bakunin states that natural laws are necessary and manifest themselves within the social and political world. Disobeying these natural laws is out of the question even if we are unaware of their existence as naturals laws are the basic need for our survival. (Bakunin: 1882) He places stress upon the fact that 'without them we are nothing'. And anarchists argue that the only way possible to get freedom is to deny authority and Bakunin wanted the rejection of all kinds of authority. (Marshall: 1993) It can be argued that authority is seen as a form of domination as it involves the exercise of power over someone else. (McLaughlin: 2007) Taking this into the account the authority exercised by government in terms of the law is not seen as domination but merely to protect individuals in society and that can be seen with the alcohol example I gave earlier on in the essay. Following on, a powerful state is needed in order to enact forceful laws upon humanity. This is the conclusion Hobbes came up with to individuals being selfish and power-seeking. (Goodway: 1898) Hobbes argued that there would be a war within everybody in society, if there were no laws and the state to be abolished. So Hobbes placed order and security above freedom. He argued that in the state of nature, men had freedom and this was where no government existed. ...read more.

So in this case, it is arguable that abolishing the law completely is far too extreme, as wanted by anarchists. As Sumner argued, the state is best serving a minimal role and there to protect individuals, for example security of people against crime. (Sumner: 1881) And so laws are needed to give punishment to those that are anti - social within society and protect those that are not. To conclude, should we agree with anarchists and abolish the law? Firstly law is placed upon society and individuals, not to uphold liberty but merely to act as a protector for the individuals. With modern society today and the vast number of people there are, it is necessary to have some sort of authority to keep people informed of their rights and to create order within society. We can emphasise with Kropotkin's view that laws merely take away freedom from individuals however law is also there for punishment, for those who are a threat to people or to society as a whole. Sumner's argument of a minimal state looks appealing to me, as the state should be there to protect individuals and nothing else. People have a mind of their own and are capable of making their own decisions and should not be left up to the state. So I think that anarchists go to the extreme in suggesting that law should be abolished as law has proved to be beneficial as shown in the essay earlier, crime rates have decreased. ...read more.