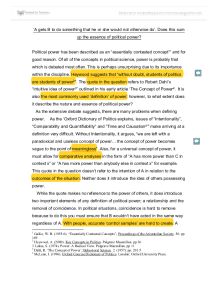 'A gets B to do something that he or she would not otherwise do'. Does this sum up the essence of political power?

'A gets B to do something that he or she would not otherwise do'. Does this sum up the essence of political power? Political power has been described as an "essentially contested concept1" and for good reason. Of all of the concepts in political science, power is probably that which is debated most often. This is perhaps unsurprising due to its importance within the discipline. Heywood suggests that "without doubt, students of politics are students of power2". The quote in the question refers to Robert Dahl's "intuitive idea of power3" outlined in his early article 'The Concept of Power4'. It is also the most commonly used 'definition' of power; however, to what extent does it describe the nature and essence of political power? As the extensive debate suggests, there are many problems when defining power. As the 'Oxford Dictionary of Politics explains, issues of "Intentionality", "Comparability and Quantifiability" and "Time and Causation5'" make arriving at a definition very difficult. Without Intentionality, it argues, "we are left with a paradoxical and useless concept of power... the concept of power becomes vague to the point of meaningless". Also, for a universal concept of power, it must allow for comparative analyses in the form of "A has more power than C in context x" or "A has more power than anybody else in context x" for example. ...read more.

The second was 'the deal' whereby exchanges were made to mutual gain, and the last, 'the kiss' involved loyalty and commitment9. Dahl's study of political issues in New Haven focussed on observable decisions, leading him to conclude that power is widely dispersed in decision-making. However, as Lukes comments, due to the nature of his study of important decisions within the community, he was "simply taking over and reproducing the bias of the system [he] was studying10". This view of power does not show how the pluralist system can be biased towards some groups over others. It is this void that the Two Dimensional View of power attempts to fill, by considering both decision-making and 'non-decision-making' within a system. This 'face' is sometimes called the Agenda Setting Face of power. As Schattschneider put it; "All forms of political organization have a bias in favour of the exploitation of some kinds of conflict and the suppression of others because organization is the mobilization of bias. Some issues are organised into politics while others are organised out11". According to the study by Peter Bachrach and Morton S. Baratz, power is not just about making decisions, it is also about preventing decisions being taken: "When A devotes his energies to creating or reinforcing social and political values and institutional practices that limit the scope of the political process to public consideration of only those issues which are comparatively innocuous to A. ...read more.

Whether they decided to exercise their power or not, with the threat of force over the students (B), the teachers (A), were in positions of power, able to make B give the correct answer to the questions, something they might not otherwise do. Marx referred, in the Communist Manifesto, to political power as "merely the organised power of one class for oppressing another20". Taking A and B to be classes rather than individuals, Marx would presumably have agreed that the deinstitutionalised form of power, in its basic essence would be summed up by the phrase 'A gets B...'. Mao Zedong declared that "power resides in the barrel of a gun21". Talcott Parsons would disagree with this as power, according to him, depends on "the institutionalisation of authority22". Feminism also raises important questions about the nature of power. For feminists, gender is the main basis of inequality, reflected in the nature and exercise of power. This quote however, could be applied to people of either gender. The "essence of political power" is something that will continue to be debated as long as power is a key concept in politics. Lukes defined power as "one of those concepts which is ineradicably value-dependant23". Critics are divided as to whether Dahl's quote in the question sums up political power, however I feel that the majority of alternative definitions, if reduced down to their 'essence', would reflect Dahl's decision-making face of power. ...read more.

This is a difficult essay to mark. Depending on the level and objectives of the module, I would likely give this a low 2.1 - but I could easily imagine a different marker deciding otherwise, because it is an essay that shows enormous analytical promise, but falls down on the basics.

There is a *lot* of information here and some good (although incomplete) critical insight. The problem is that the author's own ideas are often not developed to a sufficient extent as to make it clear the relevance of the information to the question. This is a shame, as there are a good deal more independent ideas in this essay than is common for an answer to this question.

The lack of development is itself a function of the lack of structure. Paragraphs often lack a clear point, and the lack of a defined argument in the introduction makes reading the essay a chore in places. A roadmap introduction and clear essay structure would make a huge difference to the overall quality of the paper.