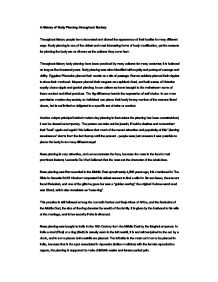 A History of Body Piercing throughout Society

A History of Body Piercing throughout Society Throughout history people have decorated and altered the appearance of their bodies in many different ways. Body piercing is one of the oldest and most interesting forms of body modification, yet the reasons for piercing the body are as diverse as the cultures they come from. Throughout history body piercing have been practiced by many cultures for many centuries; it is believed as long as five thousand years. Body piercing was often identified with royalty and portrayed courage and virility. Egyptian Pharaohs pierced their navels as a rite of passage. Roman soldiers pierced their nipples to show their manhood. Mayans pierced their tongues as a spiritual ritual, and both sexes of Victorian royalty chose nipple and genital piercing. In our culture we have brought to the mainstream some of these ancient and tribal practices. The big difference here is the expression of self choice. In our more permissive modern day society an individual can pierce their body for any number of the reasons listed above, but is not limited or obligated to a specific set of rules or conduct. Another unique principal behind modern day piercing is that unless the piercing has been overstretched, it can be viewed as temporary. The person can take out the jewelry if he/she desires and re-transform their "look" again and again! We believe that much of the recent attraction and popularity of this "piercing renaissance" stems from the fact that up until the present - people were just unaware it was possible to pierce the body in so many different ways! Nose piercing is very attractive, and can accentuate the face, because the nose is the face's most prominent feature; Leonardo Da Vinci believed that the nose set the character of the whole face. Nose piercing was first recorded in the Middle East aproximately 4,000 years ago, it is mentioned in The Bible in Genesis 24:22 Abraham requested his oldest servant to find a wife for his son Isaac, the ...read more.

The piercing is also popular in India, Nepal, and Tibet, a pendant "Bulak" is worn, and some examples are so large as to prevent the person being able to eat, the jewelry has to be lifted up during meals. In Rajasthan in Himachal Pradesh these Bulak are particularly elaborate, and extremely large. Septum piercing was widely practiced by many North American Indian tribes, the name of the Nez Perc, tribe of Washington state, stem from their practice of piercing the septum, Nez Perc, is French for Nose Pierced, and was given to the tribe by the French fur traders. Australian aboriginals pierced the septum and passed a long stick or bone through the piercing to flatten the nose, they believed a flat nose to be the most desirable. Among the Bundi tribe of the Bismarck Ranges of Papua New Guinea the piercing is performed using the thin end of the Sweet Potato plant (Ogai Iriva), usually at age 18-22. The age at which the piercing is done varies greatly between different tribes, some tribes perform the rite at age 9-10. "You were lost in the bush and now you have come back. You have come back mature; you are men. When you return to your hamlet many girls will come after you. But if you have lived well, and if they come after you, all the well. You will now have your noses pierced to allow you to sing with girls and lead a life like that of your elders. Your (Kangi Poroi) caused you to go to all this trouble, now it will be over." Source: Address by tribal elder to young men undergoing the (Kangi Poroi) manhood ritual. Source: Field notes of David G. Fitzpatrick 1977 in "Bundi, the culture of Papua New Guinea people" Ryebuck Publications, Nerang Queensland Australia 1983 Navel piercing is a modern invention and has never been recorded in primitive cultures; however the navel has long been recognized as an erogenous zone, because of the difference between men's and women's stomachs. ...read more.

On top of all that it makes the penis more aesthetically attractive, in the same way as jewelry worn on the fingers. The piercing of the Fraenulum is probably the second-most popular male genital piercing, it is usually incorrectly referred to as a "Frenum" piercing but this an abbreviated version of the true word Fraenulum . The Fraenulum is the small ridge of flesh joining the foreskin to the Glans of the penis, in most cases circumcision removes or destroys it, however in rare cases it still exists after circumcision. I can only find one account of it occurring amongst tribal people. "Amongst the Timorese of Indonesia, the Frenulum beneath the glans penis is pierced with brass rings, the function of the ring is to enhance stimulation during sex." Die kunstlichen Verunstaltungen des Korpers bei den Batta. Zeitschrift fur Ethnologie 16:217-225 1884. The practice of piercing of the foreskin for the insertion of jewelry is as old as circumcision, and is of immemorial antiquity, going back far beyond the earliest recorded history. During the games of Ancient Greece, the athletes performed nude, and to prevent their penises moving about they bound the foreskin with a ribbon and tied it to the base of the penis. This ribbon. or leather thong was called the "Kynodesme" from the Greek "Kuon" foreskin, and "Desmos" fastening band. This temporary practice probably led to the permanent piercing of the foreskin, either to prevent slaves and athletes from having sex, or to prevent them from having erections. The Roman's used a practice called Infibulations, it involved two piercing going through the foreskin (or Labia in women) and a lock (Fibula) being placed therein. The Roman historian Mensius declares that Infibulation may be traced back to the time of the siege of Troy (12th Century BC) for he points out that according to "The Odyssey" (Bk. VIII, Line 477) Agamemnon departed for the Trojan War, and left his wife Clytemnestra, in the care of the singer Demodecus, seeing that he had been infibulated. ...read more.