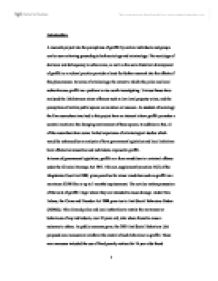 A research project into the perceptions of graffiti by certain individuals and groups can be seen as having grounding in both sociology and criminology. The sociology of deviance and delinquency

Introduction. A research project into the perceptions of graffiti by certain individuals and groups can be seen as having grounding in both sociology and criminology. The sociology of deviance and delinquency in urban areas, as well as the socio-historical development of graffiti as a cultural practice provides a basis for further research into the effects of this phenomenon. In terms of criminology, the extent to which the police and local authorities see graffiti as a problem is also worth investigating. Various theses have analysed the link between minor offences such as low level property crime, and the perceptions of certain public spaces as run down or insecure. As students of sociology the five researchers involved in this project have an interest in how graffiti provokes a societal reaction to the changing environment of these spaces. In addition to this, all of the researchers have some limited experience of criminological studies which would be enhanced by an analysis of how government legislation and local initiatives have affected communities and individuals exposed to graffiti. In terms of government legislation, graffiti as a form vandalism is a criminal offence under the Criminal Damage Act 1971. This act, supplement by section 33(1) of the Magistrates Court Act 1980, gives penalties for minor vandalism such as graffiti as a maximum �2500 fine or up to 3 months imprisonment. The act also makes possession of the tools of graffiti illegal where they are intended to cause damage. Under New Labour, the Crime and Disorder Act 1998 gave rise to Anti-Social Behaviour Orders (ASBOs). This allowed police and local authorities to restrict the movement or behaviours of any individuals, over 10 years old, who where found to cause a nuisance to others. As public concerns grew, the 2003 Anti Social Behaviour Unit proposed new measures to reinforce the control of such behaviour as graffiti. These new measures included the use of fixed penalty notices for 16 year olds found defacing properties; banning the sale of spray paint to under 18s; new police search powers; and power for councils to tackle graffiti on the streets. ...read more.

It was the final product, and the planning that had gone into it, not the actual action itself, that made it either art or vandalism. A third point that came out in the interview data, concerning how graffiti should be classified, centred on where it was located. When certain spaces were said to be affected, then graffiti was discussed in terms of vandalism. The majority of the respondents identified with this point. "(It is art) when people don't vandalise churches and schools, walls that aren't meant to be used for this" Ant "It makes you a bit cross when you go down to Withington village and you see it all over someone's house you know. You know you think that's really wrong doing it all over someone's house" Mr G The views indicated that the location of graffiti was therefore an important factor when regarding it as vandalism or not. If the defacing of public property was involved, including houses, schools and bus shelters, then the general view was that this constituted a crime, and was therefore vandalism. Areas where it was more tolerated were raised by Ant (see appendix 2b) who saw it as a question of offending others, thereby inferring that a sense of acceptability is involved. Mr B and Mr C, however, appeared to hold the view that the nature of self-expression in an artist meant that a specific location did not 'turn' graffiti into vandalism, and indeed the choice of location could actual add to the artistic statement (see appendix 2c). These two interviewees, although not in agreement with the sentiments of the other respondents, do still stress that the location of graffiti still has a role to play in the way that it is perceived. In terms of classification, it could therefore be suggested that the manner of the location, alongside the perception of the time spent on it and the aesthetic value, were all factors that influenced the respondents' evaluation of individual pieces of graffiti. ...read more.

You have to do it. You can't stop yourself doing it. The graffiti artist can't stop himself doing it, he has to do it." Mr C Appendix 2d. "All sorts of things. Mostly notes about who the kids like or think they're in love with. A few things that people maybe offended by, some titties and other genitalia, a few 'naughty words', faces, spliffs, that sort of stuff, they're teenagers that's what teenagers do." Ms. W Appendix 2e. "It is more boys overall, but more girls are joining in. Girls are less aggressive, they don't use swear words usually, well I say usually (Laughter) they, um, usually write their names, their friends names, boys names who they are going to love forever, or the way they write these days 'for eva' (more laughter)" Mr G Appendix 2f. Interviewer: why do you think people do it? "...a way of confirming they can write. Another thing of course is gang related to mark territory and provoke other gangs, they do it near to where they live and you don't have to be a rocket scientist to know who they are...There is a lot relating to someone who has been shot, it's being done by his mother, I can't say the name, but it's around Moss Side...that's probably gang related as well. After it has been removed it is quickly reapplied by gang members and in fact many teams sent out to clean graffiti have been threatened and as a result only go to some areas early in the morning to avoid confrontation." Mr G Appendix 2g. "The legislation is already in place for prosecution, there's two, well three main laws. There's the Criminal damage Act, the Violence of protection Act, and there's also the Town and Country Planning Act. You could argue that the Town and country Planning Act go more along the lines. A specific Trust could probably use it under graffiti as well because it's defacement of public buildings, whether it's fly posting or graffiti. There are probably a number of other laws, but there is legislation there. ...read more.